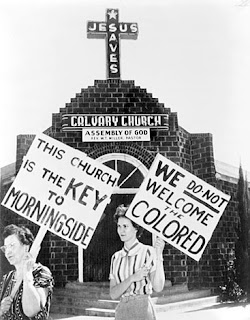 Writers at the Richmond Times-Dispatch and other Virginia news outlets are trying to spin yesterday's announcement by Barack Obama in support of marriage equality as somehow putting Obama's chances in Virginia at risk.  Even the usually savvy Larry Sabato makes some ridiculous statements such as saying Obama's move might jeopardize votes from conservatives attending the Kool-Aid drinker convention - I mean commencement at Liberty University. Seriously, does ANYONE seriously believe that people delusional enough to attend or send their children to Liberty would ever vote Democrat anyway?  As for black voters (and black pastors in particular), if they allow Obama's stance on gay marriage to tip their vote, they might just as well sell themselves back into slavery and make their control by the white supremacist crowd at The Family Foundation complete.  Needless to say, Victoria Cobb - head bitch at The Family Foundation who is about as Christian as some of the women of GCB - has her patties in a major wad over Obama's announcement.  Here's some of the BS from the Times-Dispatch:

President Barack Obama's declaration of unequivocal support for same-sex marriage could have political ramifications in battleground Virginia.  Virginia is among a handful of states that could decide this year's presidential election and is one of 31 that have voted to ban same-sex marriage in their constitution.

Some pundits believe same-sex marriage could harm the president's chances in swing states such as Virginia and North Carolina, where voters on Tuesday approved by 61 percent to 39 percent their own amendment restricting marriage to a man and woman.  Others argue the president's long-awaited decision on the issue will enliven the Democratic base and help him gain ground with independents likely to determine November's outcome.

"By November 6, the election will still be about the economy … but this could have some political impact," said Larry Sabato, a University of Virginia political scientist.  Sabato said the president's position would energize youth support and help him in college towns and urban areas.  But he added that it would give presumptive Republican presidential nominee Mitt Romney "a very useful weapon" for some swaths of the Republican electorate, like the ones watching when he offers the commencement address Saturday at Liberty University, an evangelical institution in Lynchburg founded by the Rev. Jerry Falwell.

While most Virginia Republicans remained quiet on the issue Wednesday, Democrats and activists rejoiced.  "From the state whose mistakes led to the landmark case of Loving v. Virginia," the U.S. Supreme Court case that ended raced-based restrictions on legal marriage, "let me be among the first to thank the president for realizing that it needn't take the wrenching apart of couples and a Supreme Court case for us to do what is right," said state Sen. A. Donald McEachin, D-Henrico.

Virginia ACLU director Kent Willis voiced support for the president's decision, and suggested that it was a smart political calculation.  "In the future, when marriage equality is as accepted as racial and religious equality is now, the president's statement may be viewed as a political turning point in the struggle for gay rights," he said.

Victoria Cobb, president of the conservative Family Foundation of Virginia, accused the president of "pandering to his dwindling base in an election year … the sign of a desperate candidate."  She added: "It's bewildering that anyone can say with a straight face that counterfeit marriage has the momentum after the citizens of 31 states, including California, have voted to protect the definition of marriage."