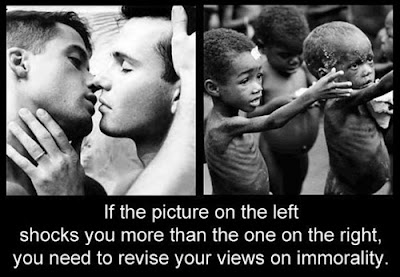 I continue to feel physically sick in the aftermath of yesterday's triumph of bigotry and infusion of religion into the state constitution in North Carolina.  The News and Observer reports that the vote split Incomplete returns show the amendment up 61.05 percent to 38.95 percent - a result far worse than in Virginia almost 6 years ago.  North Carolina can no longer advertise itself as even a remotely progressive state.  The News and Observer also reports that churches were heavily involved with the Vote For Marriage campaign using them effectively for organization and message. Perhaps the IRS needs to look into revoking some tax exempt status findings.

Read more here: http://www.newsobserver.com/2012/05/08/2052643/marriage-amendment-latest-results.html#storylink=cpy
Those who voted for the measure are, in my opinion, little better than the Taliban when it sought to inflict its version of Islam on all.  The claims of the United States that it is  the land of liberty and religious freedom were convincingly shown to be an utter lie.  The Christofascists triumphed and everyone else lost.  I have to wonder who's next on the target list to lose CIVIL law rights.  The results also demonstrate just how sick the priorities have become amongst the so-called Christians.  Take a look at the photo above and then contrast it with the photo of homophobes celebrating in North Carolina.  I find the juxtaposition to be an indictment of Christianity in this country and it underscores why I NEVER want to be called a Christian again.  Christianity's (including the Vatican's perverse version of it) main hallmarks are hate, intolerance, bigotry and indifference to the true Gospel message.  It's little wonder that the millenials are leaving in droves.  Anyone truly moral has little choice but to leave. 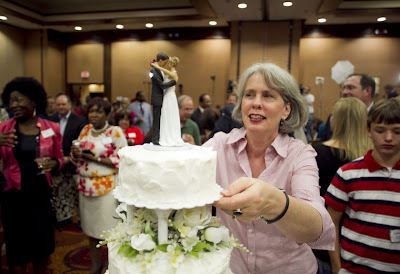 Celebrating that thousands have lost rights and that countless children will be less secure and at risk of losing health coverage and survivor benefits.  It truly doesn't get much more perverse.  Pity the boy in the right of the photo.  He's learning a truly ugly message.
Posted by Michael-in-Norfolk at Wednesday, May 09, 2012