North Carolina Adds Hate and Bigotry to Its Constituton 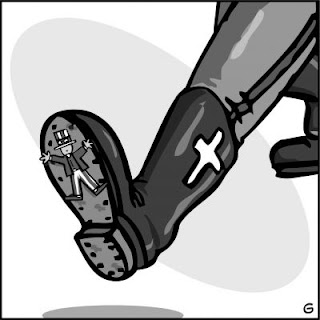 Sadly, North Carolina has joined the ranks of Christofascist states that have enshrine a foul and hate filled version of Christianity in the state constitutions.  Ironically, the boyfriend and I were scheduled to make two trips to North Carolina over the next several months, and I've decide that I am NOT going.  I he wants to go, he's going without me.  Let the bigots in North Carolina rot in fucking Hell before they will EVER see another dollar of mine.  I'd rather make a pile of money and burn it before I'll give it to businesses in an anti-gay state.  It's bad enough that I have to live in a bigoted sh*t hole state like Virginia - I certainly don't have to give my money to other nasty states.  Be assured that I will tell the local tourism bureaus why the trips have been cancelled. What is also disturbing is that six years after the toxic Marshall Newman Amendment passed in Virginia, Amendment One appears to have garnered an even higher percentage of the vote.

Quote frankly, I'm to the point that when I hear the term "conservative Christian" the term for me is synonymous with hate, bigotry and outright lies and dishonesty.  If these people own the term Christian, I want absolutely nothing to do with it.  The backers of Amendment One launched a knowing and deliberate campaign of misinformation to dupe the ignorant and uninformed into to voting for Amendment One.  Who am I talking about?  People like Lynne Green of Cary North Carolina, in my opinion, might just as well wear a sign around her neck that states "I'm an ignorant moron" based on a story in the News and Observer that reads in part as follows:

Lynne Greene, of Cary, voted for the amendment, at the Fellowship of Christ Presbyterian Church polling site. She said she could support civil unions but not gay marriage. “I have an issue with the use of the word marriage,” said Greene, a Republican who is retired. “I believe a marriage is between a man and a woman.”

If Ms. Greene had bothered to inform herself properly before she voted, she'd have known that her vote would bar civil unions.  In my opinion, Ms. Greene and the countless others like her are no different than the self-satisfied, self-congratulatory Pharisees in the Bible who Christ condemned.  It apparently never enters the minds of the intellectually lazy and self-centered individuals that they have done grievous harm to countless same sex couples in North Carolina and, worse yet, to countless thousands of children in same sex couple headed families.  And all for no reason other than that these folks like to feel superior to others and cling to antiquated writings that have been forged and manipulated over the centuries.  If there is a God, I hope he/she/it holds Ms. Greene and her fellow bigots accountable for the evil they have done.  I cannot but believe that today's vote for bigotry will be the straw that pushes a number of LGBT teens and adults to simply decide that suicide is better than living in a society controlled by such hate and ignorance filled bigots.
Here are highlights from the News and Observer on the horrible results from today;s vote:

RALEIGH -- North Carolina has become the 31st state to add an amendment on marriage to its constitution, with voters banning same-sex marriage and barring legal recognition of unmarried couples by state and local governments.  North Carolina is the last state in the south to add such an amendment, and supporters hoped for a resounding victory.

Incomplete returns show the amendment up 59.72 percent to 40.28 percent. Some large counties, including Durham and Mecklenburg have not reported results.

Money from national interest groups poured into North Carolina. The National Organization for Marriage contributed $425,000 to the Vote for Marriage campaign, according to the latest reports, and the Human Rights Campaign and its affiliates contributed nearly $500,000 to the opposition Coalition to Protect All N.C. Families.

As I said, I've set foot in North Carolina for the last time.  I only hope that others - including business being recruited to relocate to that state will reach the same conclusion and make it known why they are saying "No" to North Carolina.  Foul actions needs to result in painful consequences.