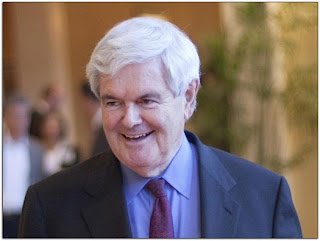 Yesterday, thrice married serial adulterer Newt Gingrich ended his ill advised campaign for the GOP presidential nomination.  But for Gingrich's overpowering ego and tempestuous love affair with himself, he would likely never have entered into the contest.  The man simply has too much baggage and is greatly disliked by those who served with him in Congress.  From my perspective, it's a case of good riddance, although it did provide an opportunity show the hypocrisy of "family values" conservatives who supported a man who cares nothing about the "sanctity of marriage."  His campaign also did much to expose the lunacy of today's GOP.  Here are highlights from the Washington Post on Gingrich's exit:

Former House speaker Newt Gingrich (R-Ga.) on Tuesday preempted his own campaign suspension, announcing in a video to supporters that he will pull out of the presidential race on Wednesday.

“I want to take this opportunity to give you an insider advance notice that on Wednesday, I’ll be officially suspending the campaign as part of a press event,” Gingrich says in the pre-announcement announcement. “I wanted you to know first because your help was vital.”  Gingrich is expected to formally end his campaign at an event in Northern Virginia.

One person Gingrich doesn’t mention in the video is Romney. Gingrich, like former senator Rick Santorum (R-Pa.), who also pulled out of his GOP primary campaign, has yet to formally pledge his support to Obama’s challenger.


If the nation is lucky, Gingrich will fade into the sunset and remain only a legend in his own mind.