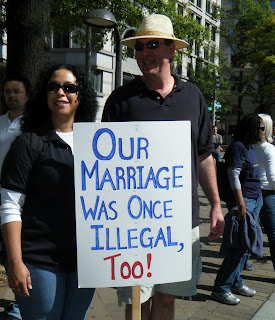 During the National Equality March, the boyfriend and I met this couple who coincidentally were from North Carolina.  The sign they exemplifies the type of legacy that North Carolina will be returning to if Amendment One passes on this coming Tuesday.  The hate and vitriol being unleashed in a final push by the Christianists is truly sickening.  Particularly heinous are the claims of North Carolina pastor Tim Rabon who claims that gay marriage will lead to "man and Beast marriage."  I suspect that in Rabon's eyes, the boyfriend and I are not even fully human.  It speaks to the ugliness that is Christianity under the Christofascists.  And it's not just the Protestants who are piling on the hatred.  The two Catholic bishops in North Carolina - you know, the guys who belong to the club that protect child rapists - are sending a letter to every registered Catholic in their dioceses urging a vote for hate and bigotry.  Would that they showed as much concern when it comes to stopping the rape and sexual abuse of children and youths.  It truly is enough to make one want to vomit.
On the positive side, former President Bill Clinton is robo calling North Carolina residents in a recorded message urging them to vote against Amendment One.  Details can be found here.  Here's the text of the message:

"Hello, this is President Bill Clinton.  I’m calling to urge you to vote against Amendment One on Tuesday May 8.  If it passes, it won’t change North Carolina’s law on marriage.  What it will change is North Carolina’s ability to keep good businesses, attract new jobs, and attract and keep talented entrepreneurs.  If it passes, your ability to keep those businesses, get those jobs, and get those talented entrepreneurs will be weakened.  And losing even one job to Amendment One is too big of a risk.  Its passage will also take away health insurance from children and could even take away domestic violence protections from women.  So the real effect of the law is not to keep the traditional definition of marriage, you’ve already done that.  The real effect of the law will be to hurt families and drive away jobs.  North Carolina can do better.  Again, this is Bill Clinton asking you to please vote against Amendment One.  Thanks."

I have not always been a Bill Clinton fan, but in this action, he is truly on the side of religious freedom, common decency and the concept of equality under the civil laws.  Thanks Bill!