Quote of the Day- Andrew Sullivan on Gay Republicans 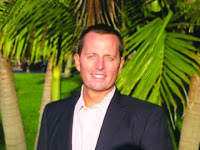 Personally, I cannot comprehend how any self-respecting LGBT individual can be a member of a political party that as an increasingly prominent part of its platform holds nothing but utter contempt for them.  Indeed, largely wishes that gays would cease to exist all together.  Yet some, like Richard Grenell, seem to be gluttons for punishment and/or masochists and as a result remain in the gay-hating GOP.  Andrew Sullivan sums up what these individuals need to recognize about today's GOP:

Yes, Grenell was prepared to work for an administration opposed to marriage equality even when he supported it passionately .  .  .  .  . He was prepared to be ostracized by many in his own community for being a Republican, taking brickbats from the gay liberal establishment, and throwing many punches back. His neoconservatism is, so far as I can tell, completely sincere, and he has a huge amount of experience as a spokesman.


It's sometimes hard to explain to outsiders what level of principle is required to withstand the personal cost of being an out gay Republican. I've only ever been a gay conservative (never a Republican), and back in the 1990s, it was brutal living in the gay world and challenging liberal assumptions. I cannot imagine the social isolation of Grenell in Los Angeles today, doing what he did.

And his reward for such loyalty, sincerity and pugnacity? Vilification.

I mean: what do Republicans call a gay man with neoconservative passion, a committed relationship and personal courage?   A faggot.