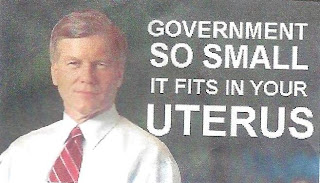 One has to suspect that Bob "Taliban Bob" "Governor Ultrasound" McDonnell may be regretting some of the extremist batshittery he's knowingly embraced in the past since it may be what thwarts his ambition to be Mitt Romney's VP nominee.  In a piece that weighs the pros and cons of various possible VP nominees, the Richmond Times-Dispatch describes McDonnell as follows:


McDonnell's other dilemma is what to do with the anti-minority voter ID law that was passed by the GOP controlled General Assembly.  The Washington Post looks at McDonnell's quandary: sign the bill and please the Tea Party crowd and Christofascists or veto it and avoid looking even more extreme to general election voters:

FACED WITH VOTER ID legislation that would disenfranchise thousands of Virginians, Gov. Robert F. McDonnell is in a quandary. He can veto the bill and incur the wrath of fellow Republicans, or sign it and reinforce the GOP’s image of hostility toward young, poor and black voters.

Mr. McDonnell is all too aware that the bill, passed by Republican lawmakers despite his warning about legislative overreach, is gratuitous at best. That’s why he sent it back to the General Assembly with amendments that would eliminate its most obnoxious feature: a requirement that ballots cast by voters who lack identification be thrown out unless the voters make a separate trek to local electoral offices to prove their identity.

But the General Assembly restored that provision and sent the bill back to Mr. McDonnell, who now faces a decision: Does he want to be known as a partisan street brawler, or as a grown-up who governs with restraint?

[M]ost responsible Virginia Republican leaders acknowledge there is no evidence of systematic voting fraud in the commonwealth. The unavoidable conclusion is that the voter ID bill is a solution in search of a problem — the sort of government meddling that the GOP usually hates.

The real reason Republicans have pushed to change the system is that they hope to inconvenience, and thereby disenfranchise, the 12,000 or so Virginians who lacked IDs when they voted in 2008 — a group, comprised disproportionately of blacks, the poor and young voters, who tilted to the Democrats.


Do I feel any sympathy for McDonnell?  Nope, none whatsoever.  He made this problem for himself.
Posted by Michael-in-Norfolk at Thursday, May 03, 2012