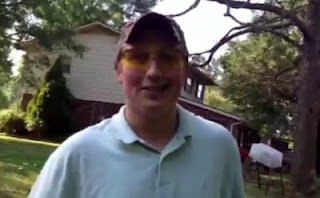 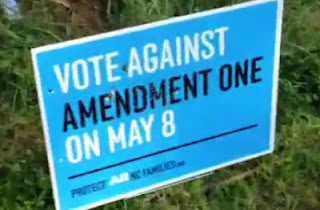 I shared with readers yesterday an abusive comment that I received that was apparently authored by someone who wasn't happy with a post I wrote in March about a foul, hate motivated, self-styled Baptist church that recently made the registered anti-gay hate group list maintained by the Southern Poverty Law Center.  As I noted, it is ALWAYS the "godly Christian" crowd that is spewing venom and hate.  Now, out of North Carolina where the Christianists are pushing for passage of the very toxic Amendment One that was described by the New York Times as "gratuitous bigotry," we see yet another proof that it is the Christianists, not the LGBT community, that are the gravest threat to the rule of law and civil behavior.  Both Towleroad and Joe.My.God are reporting on an anti-gay extremist who used a rifle to shoot up a neighbor's yard sign that opposed passage of Amendment One. First this from Andy Towle:

Says the gun owner in the video: "Right now there's this amendment trying to be passed, Amendment One. It's gonna state that marriage is between a man and a woman, which is how it ought to be. Somebody thought it'd be a good idea to put this sign near my house. They oughta know not to put stuff like that near my house."


How is NOM going to spin THIS?  .   .   .   .   I have spoken to the Kannopolis, North Carolina police department and they are looking into what will be classified a crime if the shotgun was fired onto property that includes a home or business. Kannopolis is 20 minutes outside of Charlotte, .  .  .

The simple truth - as the Times duly noted - is that Amendment One and similar laws are based on hate and contempt for the civil rights of others, be it in terms of freedom of religion or freedom of speech.  The far right constitute a clear and present danger to constitutional government and religious freedom for ALL citizens.  Here's a video clip of the anti-gay douche bag:
Posted by Michael-in-Norfolk at Tuesday, May 01, 2012