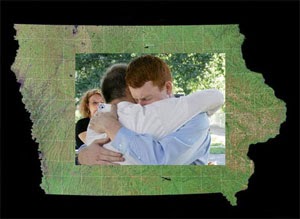 Sometimes doing the right thing is difficult and requires a great deal of courage - especially when it means standing up to societal bigotry and saying that long held prejudices are wrong.  It can even mean that retribution will be forth coming from the bigots who cannot tolerate having their bigotry called out.  That's exactly what the three Iowa Supreme Court Justices who joined in the unanimous ruling that struck down Iowa's anti-gay marriage laws.  They did the right thing and paid a price for doing the right thing.   What these three brave individuals did I suspect will be viewed by history in the same light as Atticus Finch i the novel "To Kill a Mockingbird" - one of my favorite books of all time.  Meanwhile, the opponents of marriage equality will hopefully be viewed as akin to the lynch mob depicted in To Kill A Mockingbird that is faced down by Atticus Finch.  Thankfully, the three justices are being recognized for the courage and will be receiving the Kennedy Profile in Courage Award.  Here are highlights from Freedom to Marry:

Three years after the unanimous Iowa Supreme Court decision affirming the freedom to marry, three former justices ousted in a retention election following the ruling will receive the prestigious 2012 John F. Kennedy Profile in Courage Award on Monday, May 7. Caroline Kennedy will present the award to former Iowa Chief Justice Marsha Ternus and Justices David Baker and Michael Streit at the John F. Kennedy Presidential Library and Museum in Boston.

“Former justices David Baker, Michael Streit, and Chief Justice Marsha Ternus showed tremendous courage when they joined a unanimous court in upholding the freedom to marry for all loving, committed couples in Iowa, and, again, when they honored the bedrock American value of an independent judiciary by refraining from political campaigning even as they faced an unprecedented moneyed campaign mounted against the court by anti-marriage shell-groups,” said Evan Wolfson, founder and President of Freedom to Marry. “These courageous justices have stood by their decision and fidelity to the constitutional guarantees they defended, even as Iowa’s voters have begun expressing buyers’ remorse over succumbing to the scare-tactic, special-interest campaign that rabbit-punched judges for doing their job .”

The award ceremony will take place at the John F. Kennedy Presidential Library and Museum in Boston on Monday, May 7 from 11am to 12pm and will be webcast live. The John F. Kennedy Profile in Courage Award is presented annually to public servants who have made courageous decisions of conscience without regard for the personal or professional consequences.