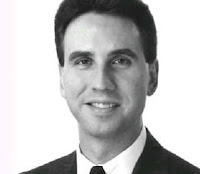 I have long been a critic of the fraudulent "ex-gay" programs and first became involved in LGBT rights activism when I worked with Wayne Besen to expose former national level "ex-gay" Michael Johnston (pictured at right) as an utter and complete fraud.  For those unfamiliar with Johnston, in 1998 he was one of Jerry Falwell's proteges and appeared in a national ad campaign financed by a who's who of the Christianist organizations.  Like many of the "ex-gay for pay" crowd, Johnston claimed that he had accepted Jesus and been cured of his homosexuality.  The problem is that he wasn't and was sleeping around the Hampton Roads area - where he is originally from - under a false name and having un-safe sex even though he was HIV+.  In my view, it is long past time that the public realize that these programs are frauds and are motivated by either (i) money in the form of fleecing the ignorant and gullible or (ii) politics were keeping the "change myth" alive is important for the Christianist political agenda.  Ex-Gay Watch reports on the cancellation of Exodus' conference:

In what seems like the logical extension of the recent trend, Exodus International has decided there were not enough people interested in attending their Love Won Out conference scheduled for later this month to justify the expense. Conference attendance has been trending downward, with their last conference bringing in barely 400 people. This is down from nearly 1000 in Exodus’ headier days.


The cancellation of this conference, the first time we know of since either Exodus or Focus on the Family held the event, appears to provide more evidence of their decline.


In the email (see below) sent out to would be attendees barely two days ago, Exodus’ Senior Director of Events David Fountain suggests that they might “Automatically convert all or part of your registration fees into a tax-deductible gift to support the ministry efforts of Exodus International.”

Joe Jervis at Joe.My.God has very apt comments on the development:


The "ex-gay" industry has been rocked to its core this year. First the head of its most infamous group announced that not one person had ever actually been "cured." Then the researcher who authored the most widely cited "ex-gay" study recanted his findings and apologized to the gay community. So maybe it's not surprising that nobody wants to attend an "ex-gay" convention.


"ex-gay" therapy is a con job, a scam, a cash-cow designed to separate self-hating homosexuals from their money. It's sort of brilliant, really. You're never "cured" so you just have to keep paying and paying and paying. It's like Jenny Craig, but without the delicious cardboard aftertaste.