Is Focus on the Family Sending A Message to Wingnuts to Support Romney? 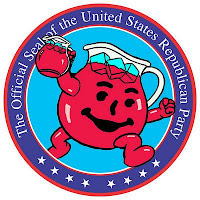 Once I got over the feelings of nausea over the Washington Post giving a platform to the religious extremist hate merchants at Focus on the Family, the next question I pondered was whether or not FOTF's president Jim Daly's op-ed was part of an effort to push Christianists and Bible beating knuckle draggers to get behind Mitt Romney and in the process overlook Romney's Mormon "cult" membership as some of the Kool-Aid drinkers have described the Mormon faith.  The "vote your values line" and the need to "support the candidate that most aligns with your values" certainly seemed to lead to that conclusion.   Note how Daly carefully avoids laying out those "values" with too much specificity.  The downside to all of this, of course, is that in exchange for such support, Mitt Romney will expected to be completely beholden to the Christianists and support their anti-gay, anti-women and pro-theocracy agenda.   Here are highlights from Daly's op-ed and its apparent message to the Kool-Aid drinkers:

With the withdrawal of Rick Santorum and Newt Gingrich from the race, the Republican Party all but has its presidential nominee. That means our country’s major issues will be faced by former governor Mitt Romney or President Obama after the ballots are counted on Nov. 6. But before the ballots are cast, voters must first address two critical challenges.

The first is to vote through the filter of the morals and values by which we live. The second is to robustly engage the democratic process that allows us the right to choose our leaders and to do so in a way that demonstrates reverence for our system of government and respect for those who answer the call to serve in it.

We all know the issues in this year’s election: The economy. Jobs. The ongoing and multifaceted threat of terrorism. Abortion policy. Health care and what role the government ought to play in it. Whether same-sex marriage should be legalized nationwide. Immigration.

Chances are neither Romney nor Obama will earn a perfect score when you go through this exercise.   .   .   .   .   So your decision will come down to this: Which man most closely stands for what I stand for? Whom do I trust more, based on his public record and personal convictions, to lead the nation in the direction I hope to see it go?Note that “values” do not equal “religion” . . .

What is of paramount importance in selecting an occupant for such an office is not whether he or she attends the same house of worship as we do; it’s whether he or she adheres to a moral and ethical code, rooted in natural law rather than doctrinal purity, that we believe offers a better vision for America.