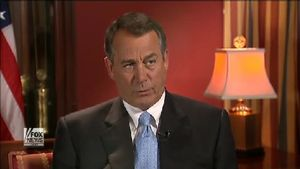 With all of the major problems facing America, one would think that Speaker of the House John Boehner and the members of the House GOP would have better things to occupy their time than continuing an anti-gay jihad that seeks to keep LGBT Americans second class citizens.  But that would be a wrong assumption.  Bashing LGBT citizens and denying all legal recognition to our committed relationships seems to trump all else.  Or at least everything other than slashing programs to the poor, the elderly and the unemployed while seeking huge tax cuts for the wealthy.  But I digress.  As MetroWeekly and a number of other news outlets are reporting, House Speaker John Boehner and Republicans in the form of The House Bipartisan Legal Advisory Group have filed a motion to intervene in another case challenging DOMA.  First, these highlights from MetroWeekly:

The House Bipartisan Legal Advisory Group today sought to intervene, as expected, in the challenge to the Defense of Marriage Act and related laws brought by Servicemembers Legal Defense Network on behalf of LGB servicemembers and veterans and their spouses. The intervention in McLaughlin v. United States comes after the Department of Justice announced in February that it would not be defending Section 3 of DOMA or the related laws -- found in the veterans benefits section of the U.S. Code -- in the lawsuit.

The move is similar to BLAG's action in a similar case brought by the Southern Poverty Law Center, Cooper-Harris v. United States, in which equal veterans benefits are being sought. BLAG, which is controlled by the House Republican leadership, has intervened in several DOMA challenges to defend the 1996 law after the Obama administration stopped defending the federal definition of marriage in February 2011, when Obama and Attorney General Eric Holder concluded the law was unconstitutional.

Referencing a visit paid to the speaker's office by Chief Warrant Officer (CW2) Charlie Morgan, a member of the New Hampshire National Guard and a plaintiff in the SLDN lawsuit who also is battling incurable stage IV breast cancer, Sarvis said, "The Speaker has turned a deaf ear to the urgent pleas of CW2 Charlie Morgan and countless families like hers, who are living with the day-to-day realities of a military that has been forced to create two classes of service members."


Other benefits that the Republicans are seeking to deny to LGBT servicemembers and their spouces are availability of military identification cards, access to bases, recreational programs, spousal support groups and burial rights at national cemeteries.  In the eyes of the GOP, LGBT servicemembers are grudgingly good enough to risk their lives for the country, but they and their spouses aren't good enough to be full citizens or to receive the benefits of other couples in similar circumstances.