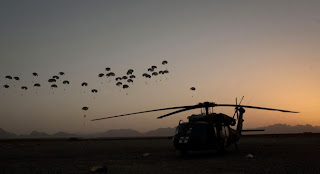 America's continued presence in Afghanistan defies all logic and reason.  Yet the waste of money and American lives continues and the deal recently signed by Barack Obama guarantees that the idiocy will continue.  The phenomenon is akin to the conservative mind described in the last post: select supposed facts no matter how wrong to support the war's continuance even though all of recorded history and the experiences of other empires (e.g., British and Soviet) in Afghanistan underscore the fools errand nature of the endeavor. A column in the Washington Post looks at this upsetting refusal by Obama and others to face reality and get the Hell out NOW!  For the record, I have a son-in-law scheduled to go back to Afghanistan this fall for his 3rd deployment.   Here are column excerpts:

Show of hands: Does anybody really understand the U.S. policy in Afghanistan? Can anyone figure out how we’re supposed to stay the course and bring home the troops at the same time?   I’m at a loss, even after President Obama’s surprise trip to the war zone. The president’s televised address from Bagram air base raised more questions than it answered. Let’s start with the big one: Why?

According to Obama, “the United States and our allies went to war to make sure that al-Qaeda could never use this country to launch attacks against us.” I would argue that U.S. and NATO forces have already done all that is humanly possible toward that end.

That smells like victory to me. Yet 94 American troops have lost their lives in Afghanistan so far in 2012, U.S. forces will still be engaged in combat until the end of 2014, and we are committed to an extraordinary — and expensive — level of involvement there until 2024. Why?  Of the U.S. troops who died this year as a result of hostile fire — as opposed to accidents, illnesses or suicide — at least one of every seven was killed not by the Taliban but by ostensibly friendly Afghan security forces.

A report by military and political behavioral scientist Jeffrey Bordin, commissioned by the Pentagon last year and now classified, concluded that “the rapidly growing fratricide-murder trend” of attacks by Afghan soldiers and police against U.S. and allied troops reflects “the ineffectiveness in our efforts in stabilizing Afghanistan, developing a legitimate and effective government, battling the insurgency [and] gaining the loyalty, respect and friendship of the Afghans.”

These friendly-fire killings are not just isolated incidents, the report says, but a “continuing pattern” that is leading to a “crisis of trust” between allied and Afghan forces. Unless there is reform of “profoundly dysfunctional Afghan governmental systems and key leaders,” the report predicts, “any efforts in developing a legitimate, functional and trustworthy Afghan army and police force will continue to be futile.”  It should be noted that U.S. commanders in Afghanistan strongly disagree. They express confidence that the Afghan army is becoming a much more competent and professional fighting force.

Another question: Obama said we will establish no permanent bases in Afghanistan. But the agreement he signed with Afghan President Hamid Karzai gives the United States continuing use of bases that we built and intend to transfer nominally to Afghan control. What’s the difference?  The United States has agreed to support Afghanistan’s social and economic development and its security institutions through 2024. Does this sound like nation-building to you? Because that’s what it sounds like to me.

Obama and the military leaders need to get their heads out of the asses and end this idiocy NOW.  Chimperator Bush began this fools errand and Obama needs to tell the nation that we cannot accomplish the impossible in a nation where much of the population despises us - and all westerners.
Posted by Michael-in-Norfolk at Friday, May 04, 2012