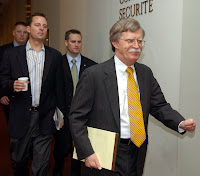 Shamelessly pandering to those I deem to be Christofascists and appearing to be controlled by their puppet strings can have a serious negative impact on voters outside of the Kool-Aid drinking alternate universe.  With his less than titillating personality problems, repeated Etch A Sketch reincarnations, being perceived as the willing tool of the extreme right is not a plus in a general election.  Particularly with the GOP appearing increasingly anti-woman, anti-gay, anti-minority and outright racist.  While the worse demagogues of the far right may be rejoicing that Richard Grenell was driven to resign, they may not have the last laugh.  No matter what Grenell's many flaws may be, all that will be remembered is that he was driven off by the Christofascists and that Romney was too cowardly to stand up to them.  If that cowardice is so evident now, what would it be like if Romney were elected?  A piece in the New York Times looks at Romney's apparent self-inflicted wound.  Here are excerpts:

It was the biggest moment yet for Mitt Romney’s foreign policy team: a conference call last Thursday, dialed into by dozens of news outlets from around the globe, to dissect and denounce President’s Obama record on national security.


But Richard Grenell, the political strategist who helped organize the call and was specifically hired to oversee such communications, was conspicuously absent, or so everyone thought.  It turned out he was at home in Los Angeles, listening in, but stone silent and seething. A few minutes earlier, a senior Romney aide had delivered an unexpected directive, according to several people involved in the call.

“Ric,” said Alex Wong, a policy aide, “the campaign has requested that you not speak on this call.” Mr. Wong added, “It’s best to lay low for now.” For Mr. Grenell, the message was clear: he had become radioactive.

It was the climax of an unexpectedly messy and public dispute over the role and reputation of Mr. Grenell, a foreign policy expert who is gay and known for his support of same-sex marriage, his testy relationship with the news media and his acerbic Twitter postings on everything from Rachel Maddow’s femininity to how Callista Gingrich “snaps on” her hair.

[T]hose close to Mr. Grenell, known as Ric, insist that when he had sought forceful support from those who had entrusted him with a major role, the campaign seemed to be focused, instead, on quieting a political storm that could detract from Mr. Romney’s message and his appeal to a crucial constituency.


“It’s not that the campaign cared whether Ric Grenell was gay,” one Republican adviser said. “They believed this was a nonissue. But they didn’t want to confront the religious right.” Like many interviewed, this adviser insisted on anonymity to discuss internal deliberations.

[A]nother, more troubling, protest that was harder to ignore was taking shape among some Christian conservatives: Mr. Romney, who opposes same-sex marriage, had betrayed them by hiring a gay man and an outspoken supporter of the cause.  The day after Mr. Grenell was hired, Bryan Fischer, a Romney critic with the American Family Association, told nearly 1,400 followers on Twitter: “If personnel is policy, his message to the pro-family community: drop dead.” The next day, the conservative Daily Caller published an online column that summed up the anger of the Christian right, linking Mr. Grenell’s hiring to the appointment of gay judges to the New Jersey Supreme Court.

But the final straw, for Mr. Grenell, was the conference call on April 26. After being told not to speak, he felt deeply undermined, worrying it would erode his credibility with journalists who had expected to hear from him, friends said.   .  .   .  .  The day after the call, complaints from the religious right picked up steam. In the National Review on April 27, Matthew J. Franck wrote: “Whatever fine record he compiled in the Bush administration, Grenell is more passionate about same-sex marriage than anything else.”
Christopher Barron, a founder of GOProud, a gay Republican group in Washington. [said] “It is an unforced error on their part.” He added, “It doesn’t bode well for the Romney campaign going forward if they couldn’t stand up to the most outrageous attacks about him being gay.”

Jim Talent, a former senator from Missouri who is a campaign adviser, called the episode a loss for the Romney campaign. “People with the kind of expertise that Ric has don’t grow on tree,” he said. “It’s a real setback for us, I think.”

The thought that would be Romney appointees will have to apparently be first vetted through Bryan Fischer and similar extremist hate merchants ought to scare the Hell out of independents and moderates.   The GOP has made a pact with the Devil in the form of the Christian Right and I hope it bites them in the ass big time.
Posted by Michael-in-Norfolk at Thursday, May 03, 2012