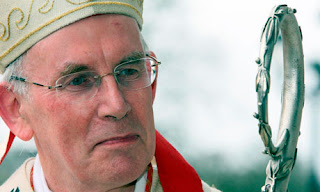 UPDATED: The Irish Times reports that calls for Brady's resignation are spreading across the political spectrum.  If the man had any shame, he'd resign.  But since he's "prince of the Church" he thinks he's above reproach.  The Nazi Pope apparently holds the same views.

After seeing a continual stream of horrors exposed in the sex abuse trial in Philadelphia where at least two cardinals were aware of and actively covered up for sexual predator priest caring nothing about the endangerment of children and youths, now a new BBC report has disclosed new dirty, if you will, on  Cardinal Sean Brady (pictured at right), the highest ranking Catholic cleric in Ireland.  As seems to have been - and likely still is - the norm, parents were never warned that their children ere being abused and the police authorities were likewise never informed.  Thankfully, in Ireland - unlike here in the USA - senior members of government are not afraid to call out the morally bankrupt Church hierarchy.   Here are highlights from KGMI-TV (the Irish Times also has coverage):

DUBLIN (Reuters) - Ireland's deputy prime minister said on Thursday he thought the head of the Irish Catholic Church should resign after a TV documentary reported the cleric had failed to warn parents their children were being sexually abused by a priest in 1975.

A BBC documentary broadcast on Tuesday said that Cardinal Sean Brady was given the names and addresses of children being abused by notorious pedophile Brendan Smyth during a Church investigation but had failed to act to ensure their safety.

"It is my own personal view that anybody who did not deal with the scale of the abuse that we have seen in this case should not hold a position of authority," Deputy Prime Minister Eamon Gilmore told parliament, when asked about Brady's response to the BBC program.

Gilmore described the revelations as "another horrific episode of failure by senior members of the Catholic Church to protect children", adding his voice to calls by groups representing victims of abuse for Brady to stand down.

Two of the victims whose identities were made known to Brady at the time were subjected to abuse long after the Church inquiry was completed and Smyth continued to abuse other young victims for more than 15 years afterwards.

Brady last year agreed to a legal settlement over his role in administering an oath of secrecy to one of the teenage victims during the 1975 investigation.  A claim the boy's father had been allowed to attend an interview at the time was untrue, the BBC documentary said. None of the parents' of other abuse victims named by the boy had been warned either, it said.


It is indeed unfortunate that American politicians lack the spine of Ireland's Deputy Prime Minister.  What's even worse is that national level Republicans are falling all over these selves to kiss the asses of the morally bankrupt U.S. Catholic bishops.  The bishops can fund and promote anti-gay jihads, but somehow they cannot clean their own filthy ranks.
Posted by Michael-in-Norfolk at Thursday, May 03, 2012

This kind of scum shouldn't be allowed to "resign" and leave. He should be dragged to jail in chains.