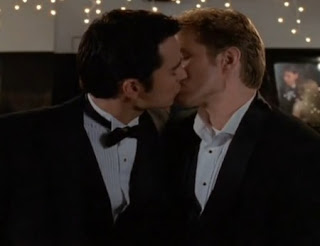 Just as the changing demographics of the nation spell long term problems for the Republican Party in its current far right/Christianist dominated incarnation, these changes in the nation's population spell long term defeat for the far right and the GOP in the same sex marriage war.  The Christianists have won a number of battles - and may even win on May 8th in North Carolina - but the results of the war against gays in the longer view will be defeat for the far right and those who practice politics of division and hate.  Many on the far right refuse to see that they are on the losing side of history and will likely be viewed no better than rabid segregationists by future generations.  Some, however, seem to be beginning to face reality.  An article in The American Conservative looks at the chronology of LGBT acceptance by society and makes the case as to why the Christianists and their GOP puppets cannot win in the longer term war.  here ares some highlights:

Rod Dreher has made the case that advocates of same-sex marriage are the aggressors on this front of the culture war. But they have presented their argument as a defensive one—a matter of equal rights being unfairly violated—and this has been a masterstroke of propaganda, winning much sympathy for their cause. The thing against which supporters of same-sex marriage have committed their aggression is tradition, specifically the West’s traditional understanding of marriage dating back a thousand years and more.

“Same-sex marriage has only been on the national radar since 1993, when a Hawaii court ruled that the state had to demonstrate just cause for why marriage ought to be denied to same-sex couples,” Dreher wrote on his blog at The American Conservative’s website. “That was fewer than 20 years ago, and in that time, support for same-sex marriage has increased at a pace that is nothing short of revolutionary. According to the trajectory of polling, at some point in the next few years, what had been the settled view of the nature of marriage for millennia will have been rejected by a majority of the American people.”

How has this happened? .   .   .   .   it is a consequence of a shift in the foundations of Western civilization that has been taking place over centuries—a shift from Christian to liberal foundations. So profound is this transformation that even the opponents of same-sex marriage are not exactly fighting to recover the old way of life.

Homosexual activity may be as old as civilization, but the idea of a category of person whose sexual identity is primarily defined by same-sex attraction, yet who is otherwise quite like the mainstream of society, is of recent vintage. That people in this group are not negligible in numbers—amounting to perhaps 5 percent of the general population—has also been a slowly dawning realization.

Once society was widely conscious of this population, and had an inkling of its extent, there was no question of reverting to the status quo ante. The knowledge itself had changed the political question. Not only were homosexuals not going back into the closet, but the rest of society could not forget that they exist. And there had been little in the way of a “traditional” approach to something that was beyond the margin of public consciousness. So now the question arose of how to think about—and act toward—this alarming new population. Should it be included in or excluded from the body politic, and on what terms?

[T]wo things steadily eroded the cultural and legal taboos against homosexuality. The first was that it had come to be seen as an innate desire about which individuals have little choice. The second was that as these strange new beings emerged from their hiding places they didn’t look so frightening—indeed, they looked a lot like everybody else. The great public-relations victory won by the gay-rights movement that hastened the advent of gay marriage was the shift in the 1990s away from a radical, anti-bourgeois image toward one more in keeping with societal norms, from the militancy of ACT-UP to the banality of “Will and Grace.” The gay-marriage effort has been a cause as well as an effect in this change: while same-sex marriage is disturbing to many Americans, it is reassuring to others, suggesting as it does loyalty to a middle-class ideal.

[I]f homosexuals were not going to be under legal or therapeutic penalty, what would become of them? This is the question to which few conservatives can supply a satisfactory answer because the principles that conservatives affirm point toward policies that conflict with their wishes.

The second consistent position that conservatives can embrace, however reluctantly, would be that of providing full legal equality. This could be seen as a capitulation to liberalism; it could also be seen as an acknowledgement of reality. The trouble with this position is that it doesn’t stop where most conservatives would like it to stop: the logic of legal equality certainly demands that homosexuals be allowed to serve in government, including in the military, and prima facie it demands that they be afforded equal access to the institution of marriage. Conservatives can try to draw the line before that point, but doing so requires making an exception to the principle of legal equality, and exceptions are, by their very nature, more difficult to establish than arguments that go along with general rules.

In an age when the Church no longer supplies the institutional framework for family life, the definition of marriage has become radically uncertain. Into this fluid environment—in which individualism or atomism is once again rising to the fore, as in the Roman Empire—the new fact of homosexuality was gradually introduced. The result, same-sex marriage, has shocked conservatives. But this innovation has moved so far so quickly only because it is not at all out of step with the institutions and ideas of our time.