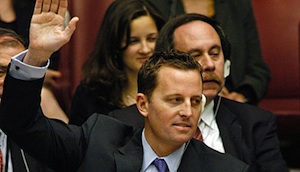 Today some of my fears about a Mitt Romney administration were confirmed when openly gay Ric Grenell, Mitt Romney's pick for his campaign's foreign policy spokesman, resigned under the withering attacks and denigration of the Christianist puppet masters of today's Republican Party.  Romney simply does not have the strength or character to stand up to the hate and divisiveness of the far right.  The Washington Post has coverage on Grenell's "resignation" and Andrew Sullivan has on point commentary.  First, these highlights from the Washington Post:

Richard Grenell, the openly gay spokesman recently hired to sharpen the foreign policy message of Mitt Romney’s presidential campaign, has resigned in the wake of a full-court press by anti-gay conservatives.  In a statement obtained by Right Turn, Grenell says:

I have decided to resign from the Romney campaign as the Foreign Policy and National Security Spokesman. While I welcomed the challenge to confront President Obama’s foreign policy failures and weak leadership on the world stage, my ability to speak clearly and forcefully on the issues has been greatly diminished by the hyper-partisan discussion of personal issues that sometimes comes from a presidential campaign. I want to thank Governor Romney for his belief in me and my abilities and his clear message to me that being openly gay was a non-issue for him and his team.

According to sources familiar with the situation, Grenell decided to resign after being kept under wraps during a time when national security issues, including the president’s ad concerning Osama bin Laden, had emerged front and center in the campaign. Pieces in two conservative publications, the National Review and Daily Caller, reflected the uproar by some social conservatives over the appointment.


Now, this commentary from Andrew which sums up why I am no longer a member of the GOP:

Why? Grenell - like almost every homosexual in America - favors equal marriage rights for gays. He has indeed blasted Obama for his reticence on this question. He is also quite clearly a movement neo-conservative on a whole variety of issues, especially the area he was selected to be a spokesman for: national security. He was John Bolton's spokesman for Pete's sake. If a Boltonite cannot be allowed to speak about foreign policy because he is gay, is there any place for any gays in the GOP?

If opposition to marriage equality is a litmus test for gay inclusion in the Romney campaign and administration, then there will be scarcely a single openly gay person willing to sign up to play any part in it. It has come to this. The GOP will have no gays within it unless they are prepared openly to oppose their own core rights and dignity. Romney has gone from promising to be more pro-gay in the Senate than Ted Kennedy than hanging a lone gay spokesman out to dry and pledging to write into the very constitution that gays are second class citizens.

If you're gay, or your friend, son, daughter, brother, sister, aunt or uncle is gay, you just learned something about what the GOP now is. Do not forget it

I'm sometimes accused of being a "single issue" voter by some former colleagues from my GOP days.  Somehow, they cannot grasp that being gay in this society involves hundreds of issues of where I am not afforded fully rights of a citizen.  It may be marriage rights, inheritance rights, availability of domestic partner health insurance coverage rights, employment non-discrimination protections, income tax treatment, etc. - the list is long - but it's NOT a single issue. Wanting full equality as a human being and a citizen is NOT a single issue matter.
Posted by Michael-in-Norfolk at Tuesday, May 01, 2012