The Republican War on Voters 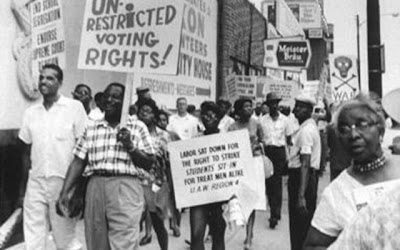 When a political party's policies are not attractive to the majority of rank and file voters and seek to protect the immensely wealthy, there are not too many approaches that will lead to electoral victory other than seeking to limit the ability of hostile voters to cast their vote.  That' seemingly the GOP approach (including the Virginia GOP) to the 2012 elections and beyond.  Hence the concerted war to disenfranchise minority voters and others who don't fit the profile of Gilded Age ultra wealthy under the dishonest premise of stopping largely non-existent "voter fraud.".  Sadly, the GOP seems increasingly to be a party in favor of oligarchy and religious extremism.  A column in the Washington Post looks at this disturbing phenomenon.  Here are some highlights:

Republicans are waging the most concerted campaign to prevent or discourage citizens from exercising their legitimate voting rights since the Jim Crow days of poll taxes and literacy tests. Four years ago, Democrats expanded American democracy by registering millions of new voters — mostly young people and minorities — and persuading them to show up at the polls. Apparently, the GOP is determined not to let any such thing happen again.

According to the nonpartisan Brennan Center for Justice at New York University, which keeps track of changes in voting laws, 22 statutes and two executive actions aimed at restricting the franchise have been approved in 17 states since the beginning of 2011. By the center’s count, an additional 74 such bills are pending.

The most popular means of discouraging those young and minority voters — who, coincidentally, tend to vote for Democrats — is legislation requiring citizens to show government-issued photo identification before they are allowed to cast a ballot. Photo ID bills have been approved by Republican-controlled legislatures in Alabama, Kansas, Pennsylvania, South Carolina, Tennessee, Texas and Wisconsin, and by referendum in Mississippi. .   .  .   . In Virginia, Republican Gov. Bob ["Governor Ultrasound] McDonnell has not decided whether to sign a voter ID bill the legislature sent to his desk.

In theory, what could be wrong with demanding proof of identity? In the real world, plenty.  As Republican strategists are fully aware, minorities are overrepresented among the estimated 11 percent of citizens who do not have a government-issued photo ID. They are also painfully aware that, in 2008, President Obama won 95 percent of the African American vote and 67 percent of the Hispanic vote. It doesn’t take a genius to do the math: If you can reduce the number of black and Latino voters, you improve the Republican candidate’s chances.

If photo ID laws were going to be the solution, though, Republicans had to invent a problem. The best they could come up with was The Menace of Widespread Voter Fraud.  It’s a stretch. Actually, it’s a lie. There is no Widespread Voter Fraud. All available evidence indicates that fraudulent voting of the kind that photo ID laws would presumably prevent — someone shows up at the polls and votes in someone else’s name — just doesn’t happen.

Of course, there are other potential kinds of electoral fraud; crooked poll workers, for example, could record votes in the names of citizens who actually stayed home. Election officials could design ballots in a way that worked to a specific candidate’s advantage or disadvantage (see Florida, 2000). But none of this would be prevented by photo ID, which still hasn’t found a problem to solve — except, perhaps, an excess of Democratic voters.

Even more sinister are new laws, such as in Florida, that make it much more difficult for campaigns — or anyone else — to conduct voter-registration drives. If you thought Republicans and Democrats agreed that more Americans should register to vote, you were sadly mistaken.

In the name of safeguarding the sanctity of the ballot, Republicans are trying to exclude citizens they consider likely to vote for Democrats — the young, the poor, the black and brown. Those who love democracy cannot allow this foul subterfuge to succeed.

This GOP practice, combined with the party's embrace of theocracy and religious extremism make it impossible for me to be a Republican.  I may not fully identify as a Democrat, but I sure as Hell am not today's version of what it takes to be a Republican.  Just about 100% of my extended family feel likewise and have fled from the GOP.
Posted by Michael-in-Norfolk at Tuesday, May 01, 2012