Quote of the Day: The GOP Elite and Gays 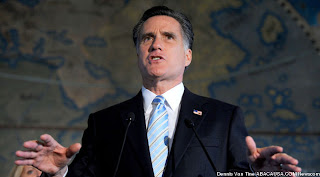 I am frequently chastised by some for being vehemently against today's Republican Party and some think I'm a Democrat because of it.  What I am is someone who wants logic and reason and some shred of compassion for the less fortunate to control how government policy is formulated.  That simply no longer happens in the GOP.  Worse yet, a Romney presidency would likely see things even get worse as Andrew Sullivan summarizes very well:

The gay-inclusive elements in the elites simply do not have the balls to tackle the religious right. And this is particularly true of Romney, as this case now proves. The Christianists gave Bush a pass on social issues because of his born-again Christianity. They trust Mormon Romney not an inch. And this week demonstrates without any doubt that Romney will therefore not be able to deviate from their wishes an iota. He has no room to maneuver. The notion that he could be a moderate on social issues in office is, alas, a pipe dream.


Do we really want policy being set by the Christianists?  I for one do not and those who still cling to the vision of a Republican Party that no longer exists need to wake up and face reality.
Posted by Michael-in-Norfolk at Thursday, May 03, 2012