Dan Savage's Remarks on the Bible: The Bullies Can Dish It Out, But Can't Take It 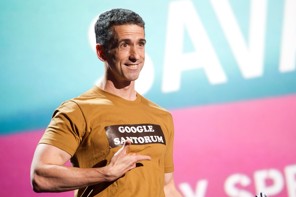 Watching the tempest over Dan Savage's recent remarks on the Bible and simple minded Christians underscores the Christianists' belief that they can say any kind of horrible and demeaning thing about gays - e.g., we are disease ridden, AIDS is God's punishment, we threaten civilization, we're all would be pedophiles, etc., etc. - and that's just fine.  The nasty comment I received and highlighted in a post the other day is but one example of the bile the Christianists put out literally daily.  But God forbid that they get some of their own tactics and types of language thrown back at them.  Then suddenly they're wailing and gnashing their teeth about being bullied.  Last time I looked, we haven't seen any Christian teens committing suicide on a weekly or almost daily basis because of anti-Christian bullying.  The hypocrisy and disingenuousness of the right is indeed breath taking.  And that was the point of Savage's comments: the unrelenting hypocrisy of the Christianists who have made Christianity into something hideous.  A column in the Washington Post looks at the crocodile tears of the "godly Christian" set:

In general, it is a bad idea to insult people’s appearance, religious texts, or children.

It’s causing a minor firestorm. Conservative commentators are accusing Savage of bullying. Several students walked out, and he called their response “pansy-[patooted].” He has since apologized for that — but not for the first few Biblical turdblossoms.

The indignation machine these days is remarkably well-oiled. As John Shore noted: “I, for one, have no idea what the world has come to, when a person who has made his career out of speaking, in the most unadorned language possible, directly to great numbers of young people about some of the most important issues in their lives, dares to speak in unadorned language directly to a great number of young people about one of the most important issues in American life today.”

If people earnestly believe that they are justified in treating you badly, if they object to your very existence on what seem to them to be moral grounds, you are justified in calling them out on it. Sometimes, you can go so far as to rename them. If someone tells you that you will burn in Hell for all eternity, you can turn around and say unprintable things about his religious text.

Savage’s circle has been expanding for a reason. In a perverse way, if he’s in a position to make other people feel bullied, that’s a sign of progress. If only we'd come far enough he didn’t have to use that position to do so.

It is long past time that the Christianists cease getting special deference.   They do simply do not deserve the special rights they continually demand - even as they bully and abuse others.
Posted by Michael-in-Norfolk at Wednesday, May 02, 2012

Sounds like Dan is saying pretty much what you have been, only from a more public platform.

Your not wrong and neither is Dan Savage. Fundamental Christians simply do not understand the Gospel of Jesus Christ. Because they misinterpret the Gospel so willfully, one could even argue they are not really Christians at all.

That said just my usual reminder to your readers. The Christianists you speak of are not the only type of Christians there are. Many moderate and liberal Christians see gay and bisexual people as creatures of God just as all people are. As such, they should enjoy all the benefits entitled to every American.