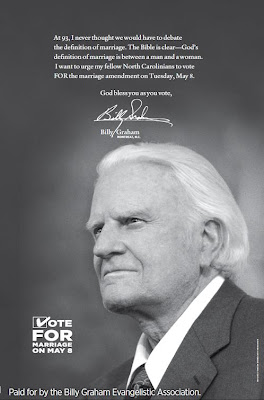 For many years Billy Graham has managed to maintain an apparently false image that he's not an extreme gay hating bigot.  Or at least he did so until today when he came out in support of North Carolina's heinous anti-gay Amendment One.  Highlighting the extent of Graham's bigotry was another announcement of support for Amendment One by Neo-Nazi and white supremacist site World-Wide White Pride.  One can only hope that Graham's legacy will become irrevocably associated with his actions today and that he will seen by future generations as no better than the segregationists of fifty years ago.  Here are highlights from the Charlotte Observer on Graham's belated coming out as a flaming gay hating bigot:

The Rev. Billy Graham urged North Carolina voters Wednesday to support an amendment to the state constitution banning gay marriage, a move that an observer said was highly unusual but another said was in keeping with the minister's moral beliefs.

His complete statement about Amendment One will be part of full-page ads slated to appear in 14 North Carolina newspapers throughout the weekend.  Graham's statement was issued by the Charlotte-based Billy Graham Evangelistic Association, which is led by Graham's son, the Rev. Franklin Graham. Franklin Graham recorded a message last month in support of Amendment One, which is on the ballot in the election Tuesday.

William Martin, who wrote the authorized Graham biography "A Prophet With Honor," couldn't recall another effort by the Billy Graham Evangelistic Association like the one the ministry plans in support of Amendment One.

Read more here: http://www.charlotteobserver.com/2012/05/02/3214145/billy-graham-backs-nc-anti-gay.html#storylink=cpy
"I am somewhat surprised that he would take that strong a stand," said Martin, professor emeritus of religion and public policy at Rice University. "In the past, I have heard him say with respect to homosexuality, there are greater sins. Franklin has been more outspoken about it, but it sounds as if this is Mr. Graham expressing his own will."

If this is truly Graham's view point - and not that of his far sleazier son, Franklin, then I believe he's buying himself a reserved seat in Hell, if Hell exists, where he will be amongst scores of the "godly Christina" crowd.  One also cannot help but wonder how many of the ranks of the poor and homeless could have been helped with the funds being used to pay for this 14 messages of bigotry.  Why is the phrase "modern day Pharisee" springing to mind?

I did mention another announcement of support for Amendment One which demonstrates the company in which Billy Graham and homophobes like him have yoked themselves.  Joe.My.God and Pam's House Blend both have coverage on the Neo-Nazi support Amendment One is garnering.  Here are Joe's thoughts on the issue:

Neo-Nazi and white supremacist site World-Wide White Pride today happily posted the report that North Carolina's Amendment One was actually written to prevent the Caucasian race from extinction. There's no apparent editorializing on their link-heavy post on this latest scandal, which since yesterday has moved into the mainstream media. But I think it's safe to call this a Nazi endorsement.

To recap, Amendment One is supported by child abusers, shotgun-toting creeps, racists, AND Nazis. All we need now is a serial killer for a royal fucking flush in Evil Poker.

Such is the company now kept by self-congratulatory Christianists and the professional Christian crowd.  WWJD? 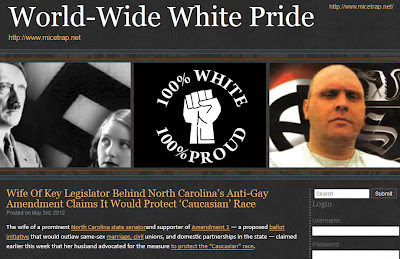