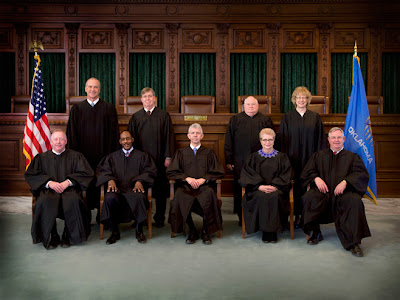 While I suspect that the members of the Oklahoma Supreme Court are hardly what one would call flaming liberals, I also suspect that nonetheless there will be hyperventilating about "activist judges" who oppose "the will of the people."  Or at least the people who live in some bizarre alternate universe where protecting embryos is a highest priority while taking care of the living - particularly if they're gay - doesn't rate very highly. Politico looks at this defeat for the batshit crazy Christianists and their political whore Republican allies.  It speaks volumes that the GOP and Christianist forces in Virginia still seek passage of a similarly unconstitutional measure in this state.  Here are some highlights:

The Oklahoma Supreme Court on Monday halted an effort to grant “personhood” rights to human embryos, saying the measure is unconstitutional.

The state’s highest court ruled unanimously that a proposed amendment to the Oklahoma Constitution that would define a fertilized human egg as a person violates a 1992 U.S. Supreme Court decision involving a Pennsylvania case and “is clearly unconstitutional.” Supporters of the personhood amendment are trying to gather enough signatures to put it before Oklahoma voters on the November ballot.

Opponents contend the measure would ban abortions without exception and interfere with a woman’s right to use certain forms of contraception and medical procedures, such as in vitro fertilization.

The American Civil Liberties Union and the New York-based Center for Reproductive Rights filed a protest with the state Supreme Court on behalf of several Oklahoma doctors and residents. They asked the court to stop the group Personhood Oklahoma from gathering signatures.

The nine-member court determined the initiative petition “is void on its face” and struck it down.
“The only course available to this court is to follow what the United States Supreme Court, the final arbiter of the United States Constitution, has decreed,” the court said.

The ruling is the latest setback for abortion opponents who have been pursuing personhood measures in several states. In December, a judge in Nevada ruled that a personhood initiative petition was vague and could not be circulated for signatures to qualify for the 2012 ballot. Similar personhood proposals were defeated last year in Mississippi and Colorado.

The backers of the signature drive have said their goal is to set up a legal challenge to the landmark Roe v. Wade decision by the U.S. Supreme Court in 1973 that gave women a legal right to abortion.

Opponents argued that the proposed amendment “would confer rights on a fertilized egg that trump the rights of each woman to determine whether and when to conceive and whether to carry a pregnancy to term.”

Court documents filed by opponents noted the state Supreme Court rejected an attempt to use the initiative petition process to ban abortion in 1992, ruling that the process could not be used to curtail rights secured to women by the U.S. Constitution.

Nancy Northup, president and CEO of the Center for Reproductive Rights, said the Oklahoma Constitution specifically prohibits amendments that are “repugnant to the Constitution of the United States.”

Ryan Kiesel, executive director of the ACLU’s Oklahoma chapter and a former Democratic lawmaker, said the court’s decision Monday supports the notion that a woman and her family, “and not the government,” should be making decisions on reproductive health care.