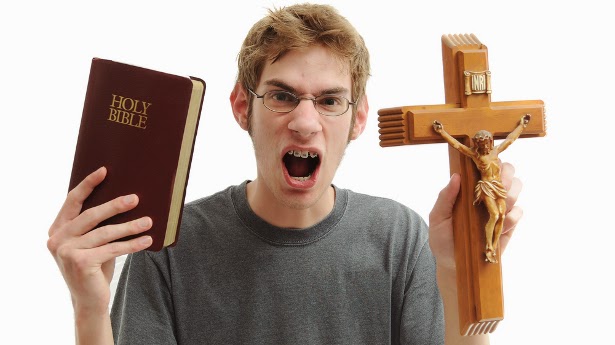 In the wake of John Paulk's confession of the falsity of the "ex-gay myth" noted in a post yesterday, I again could only think of the harm that is done daily to thousands, if not millions of LGBT youth, who are growing up in conservative Christian (or Muslim) homes where they are exposed to relentless brainwashing that will cause in some cases lifelong harm.  One of the first posts I did on this blog (it would be another seven months before I began blogging daily) looked at the harm done by "deeply held religious belief" and what I deem to be a form of hate crime/child abuse.   Sadly, the scars remain sometimes forever - I have middle aged friends who cannot let go of the anti-gay indoctrination of their youth and/or remain closeted to their families out of fear of rejection, thereby missing out of opportunities for happiness and fulfilling relationships Here are excerpts from that early post that bear to be reiterated today:

I came across this column on a blog named "Proceed at Your Own Risk" which, although I did not grow up in a true fundamentalist home, aptly describes what growing up gay (and in the closet) was like in conservative areas. Every religious denomination that refuses to give gays full inclusion, in my view, continues this type of mental and psychological abuse, to this very day. I find it very hard to believe Christ would condone such brutality.

Every so once in a while I allow myself to consider the nightmare existence of a queer child growing up with religious fundamentalist parents. The thought of it is so painful that I need to keep it mostly compartmentalized and in the back of my mental and emotional closet.  It's an aspect of the world of homophobia and fundamentalist religion that we very much ignore. For many reasons, it's the forgotten stepchild of gay activism, child care services and the mental health profession.

But the obvious fact is that there are thousands of these kids living in a hell on earth as they fight their way through childhood.

I can think of few other situations that have the potential to engender such a relentless and pervasive environment of psychological and possibly even physical child abuse. Generally speaking we do not do a good job of handling child abuse in this nation but when it come to gay kids the picture is even bleaker. The ratio of gay kids to straight kids among runaways, child prostitutes and suicides, well documented by the CDC, makes this painfully clear.

Long before a child develops self-awareness of his or her own sexual orientation, he is trained to believe that homosexuality is an abomination and a perversion that is a threat to the American way of life.

This young and impressionable child learns that the Bible, the absolute word of god and truth, clearly states that homosexuals are an abomination and that their sin is punishable by death.
And then, worst of all, he learns that homosexuality is a choice made by sick and evil people and that to make this choice is a very bad and wicked thing. But then nature takes its course and at some point the gay child realizes that he's "chosen" homosexuality. He doesn't remember being asked. He doesn't remember checking off that particular choice on any application. And he searches through the mail for the recruitment brochure, but it isn't to be found.

Somehow, somewhere along the way, he has made this monumental, life-changing and life-shattering choice, against his will and against the will of god.  No problem, he thinks, he'll just chose otherwise until he one day realizes that he can't. Try as he might, the gay just won't go away, along with the color of his skin and the texture of his hair.

His intellectual and emotional energies become singularly focused on changing that choice but to no avail. He turns up the engines and works hard to hide his nature. Self-hatred begins to rip open his guts. Childhood innocence and joy are not part of his experience. He lives in a state of constant dread and anxiety, fearing exposure or worse.

It's an exhausting and soul-crushing childhood. While other children are looking to the future with hope, he lives in a world of despair, pain and fear. While other children are considering ballerina, doctor, astronaut or fire fighter, the gay child's energies are focused on hiding his or her true self. The boy dreads his first fake sexual encounter: will he be able to perform? The girl worries less, she will just turn away and cry and wait until it's over.

Many ex-gays believe that the origins of homosexuality are to be found in an abusive childhood. Their logic is flawed but their childhoods were likely abusive. Many of them come out of strict Christian homes. Growing up gay in a strict fundamentalist Christian home most likely oftentimes means a battering patten of abuse, certainly verbal and sometimes physical. Many of these parents likely steam roll over the self-esteem and self-confidence of these children as they struggle to make "her" more feminine and "him" less of sissy.

Protected by a very misguided notion of religious freedom, fundamentalists of all sorts are allowed by our society to engage in the ultimate hate crime, a pervasive and monstrous form of child abuse that will one day be seen by social historians and anthropologists as a very barbaric and grotesque aspect of the American civilization.

Sexual orientation is not a choice, but our society's willingness to tolerate this terrible treatment of children is a choice and a choice that should make us all ashamed. We will be judged harshly by future generations as we are already judged by more evolved societies on the other side of the Atlantic.

And when the abuse of homosexual children was recognized for what it was, modern nations changed--tragically we were not among them.

Freedom of religion was designed to protect people from oppression and persecution. Instead, in 21st Century America, "freedom of religion" is used to do great harm to millions of Americans, including many of our children who are unable to defend themselves, their psyches and their hearts.

If we allow religious beliefs to justify human degradation and oppression, we reduce our constitution to nothing but an old piece of paper.

Homosexuality is common throughout hundreds of animal species and every scientific measure that has been used thus far has confirmed over and over again that this is about nature and not nurture. Of course, people who act exclusively on faith and belief rather than on fact and reason will never be convinced of this. The facts are that dinosaurs and unicorns did not miss the Ark and gay children did not chose to be who they were born to be.

But the question that seems to plague us at every turn these days is whether we are to be a nation of fact and reason or a nation of people packed and ready to jump on the Rapture bus?

In the meantime, suffer the little children.