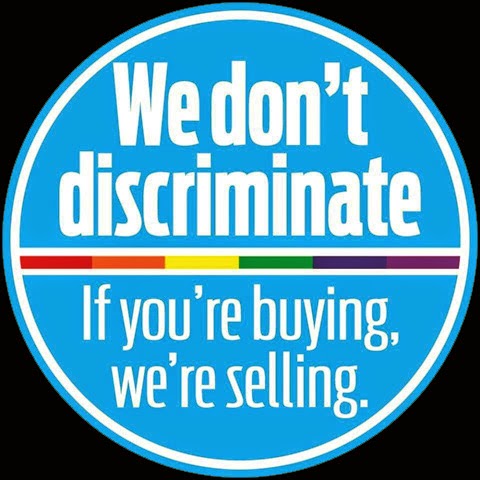 Recently, the GOP controlled Mississippi legislature passed a "turn the gays away" law that was signed into law by the GOP governor.  Some businesses were appalled at the legalization of religious based discrimination and came up with a simple campaign to indicate to customers that they were open to business for all citizens by placing stickers in their windows (see image above).  Not surprisingly, hate merchants from the vitriolically anti-gay American Family Association ("AFA") are now claiming that such businesses are "bullying" and persecution Christians.  AFA, a designated hate group, like what seems to be a majority of Christofascists, believes that anything that restricts Christians' ability to persecute others equates to "bullying" Christians.  It's a sick mindset, but it is now the norm among the "godly folks."   OneNewsNow - an AFA controlled "news" outlet - looks at the disingenuous shrieks of Christian persecution:

In response to passage of that bill, owners who want the business of homosexuals are now posting blue, circular window stickers that incorporate the rainbow colors typically associated with homosexual activism.

"It's not really a buying campaign, but it's a bully campaign," he says, "and it's being carried out by radical homosexual activists who intend to trample the freedom of Christians to live according to the dictates of scripture.

"They don't want to hear that homosexuality is sinful behavior – and they wish to silence Christians and the church who dare to believe this truth."

Smith offers a word of caution for those who do business with facilities posting the decal supporting homosexual activism. "If you do that, you are agreeing with these businesses that Christians no longer have the freedom to live out the dictates of their Christian faith and conscience," he tells OneNewsNow.


A website affiliated with the sticker campaign lists the Mississippi businesses that are participating. One of those listed is Jackson-based Milsaps College, which is connected with the United Methodist Church.


The take away?  That AFA and those who support it are vile and such people should not be treated with deference or respect.  They need to become social and political pariahs. A second take away?  It's little wonder that Mississippi ranks almost dead last among most states except when it comes to racism, homophobia and bigotry in general.