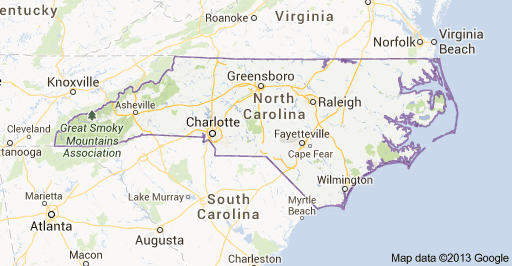 The motivation behind anti-gay laws, including bans on same sex marriage such as Virginia's Marshall-Newman Amendment has always been and continues to be anti-gay animus and the desire of far right Christians - the Christofascists - to impose their religious beliefs on all of society.  Moreover, whenever their ability to persecute others is restricted, these same folks whine and shriek that their "religious liberty" and religious freedom is under attack.  What is stunning about the new challenge to North Carolina's anti-gay Amendment 1 is that the United Church of Christ and other progressive clergy have taken the Christofascist's argument and turned it around against them.  In a secular nation with no established religion, no one set of religious believers should be allowed to define civil law marriage rights.  Yet this is precisely what Amendment 1 does, as does the Marshall-Newman Amendment.  A piece in Huffington Post looks at the unusual dynamics of the North Carolina gay marriage litigation compared to what we have seen in other states.  Here are excerpts:

An unusual lawsuit in North Carolina is shifting the conversation about religious freedom -- and could be driving a wedge between some major opponents of same-sex marriage.

Clergy from the United Church of Christ, a liberal denomination that has allowed pastors across the U.S. to officiate at gay weddings since 2005, filed suit in a North Carolina district court Monday, becoming the latest in a nationwide series of cases against a state's same-sex marriage ban. Like dozens of similar lawsuits filed across the country, the North Carolina suit argues that the state's ban violates gay couples' constitutional right to equal protection. But in a unique twist, the suit adds that the ban also violates the First Amendment right of members of the clergy to practice their faith -- because the state's ban criminalizes pastors who bless same-sex unions, leaving clergy open to arrest.

Albert Mohler, president of the Southern Baptist Theological Seminary, declared Tuesday that North Carolina's ban is "dubious and dangerous." And while Mohler has not changed his opposition to same-sex marriage -- he once equated homosexuality with cancer -- he did concede that the UCC clergy's lawsuit is "very convincing."

Legal experts say that North Carolina's criminalization of clergy for blessing a same-sex union is unique and not typically found in other states where same-sex marriage is banned.

Experts say the lawsuit may reflect a shift in the fight over gay rights, noting that opponents of same-sex marriage have lately been arguing more and more that allowing gay couples to wed threatens the religious freedom of both clergy and business owners who believe their faith opposes it.

"It turns everything on its head," Randall Balmer, a professor of American religious history at Dartmouth College and author of First Freedom: The Fight for Religious Liberty, said of the suit.

Moore [of the Southern Baptist Convention], along with other religious conservatives, argued that when it comes to recent laws regulating same-sex marriage, religious liberty is a right that should be reserved for those who disagree with gay marriage.

The North Carolina clergy disagree.  "As a Christian minister in a Christian church that supports same-gender marriage, I should be religiously free to offer my services as a minister performing a wedding for a couple in my congregation," said Rev. Nancy Ellett Allison, a United Church of Christ plaintiff in the case, which also includes a dozen non-UCC clergy and same-sex couples.

Katherine Franke, a professor at Columbia Law School who recently helped launch a project to research the increased use of religious exemption claims in courts, sees this trend as evidence of the momentum of the gay rights movement.

"This is plan B [for the Christofascists]," she said. "Plan A was defeating the same-sex marriage movement in the courts and legislatures, and they've lost that battle. So Plan B is to turn to religion: You can have your laws, they just don't apply to me."