Republicans Run From Another GOP Racist 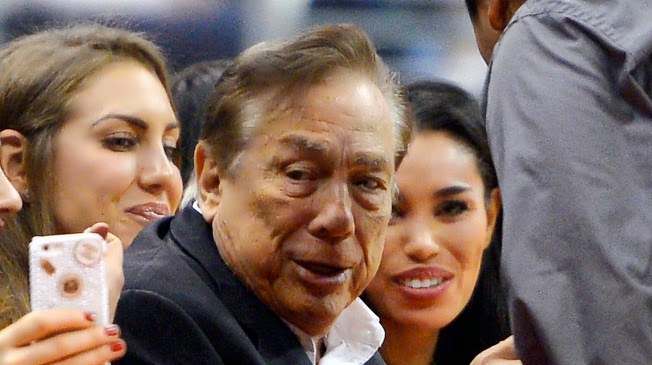 Republicans have not even finished running from Tea Party nutcase/hero Cliven Bundy and now they find themselves running from another case of racist batshitery.  This time, the verbal diarrhea came from Los Angeles Clippers owner Donald Sterling  who both alienated advertisers and sent some GOP pundits trying to label Sterling as a Democrat.  Despicable blowhard Rush Limbaugh even tried to say that Sterling got into trouble because he did not donate enough to the Democrats.  Unfortunately for the Republicans, Sterling is a registered member of the GOP.  Talking Points Memo looks at this latest round of the GOP trying to hide from the overt racism of much of its base.  Here are some highlights:

Over the weekend, while nation-wide attention was focused on the racist comments reportedly made by Los Angeles Clippers owner Donald Sterling, some conservative commentators were focused on something else: Sterling's party affiliation.

Specifically, certain conservatives were taking the media to task for supposedly ignoring Sterling's ties to the Democratic Party. But a bit of context was missing. Sterling is a registered Republican.

A search of The Los Angeles County Registrar-Recorder's website using Sterling's name, date of birth, and address turns up a Republican registration, and the registrar-recorder's office confirmed the information to TPM on Monday. (The initial tip came to TPM from public records compiler eMerges.)

Conservatives -- including Matt Drudge, The National Review, and The Daily Caller -- have taken time since the Sterling story broke to describe him as a Democrat or point to Sterling's past contributions to Democratic politicians.

Sterling has given money to Democrats, though his most recent donations appear to have taken place more than a decade ago. According to the Center For Responsive Politics, those donations include $2,000 to then-Sen. Bill Bradley (D-NJ) in 1989, $1,000 to future California Gov. Gray Davis (D) in 1991, and $1,000 to Sen. Patrick Leahy (D-VT) in 1991. Records kept by the National Institute on Money in State Politics also indicate that Sterling gave another $5,000 to Davis in 2002.

By Monday afternoon, The National Review had updated its piece on Sterling's political ties.

The moral?  When a political party has its candidates making dog whistle statements to racists and welcomes thinly disguised white supremacists it will end up populated by racists, a number of whom will not know went to think before speaking.