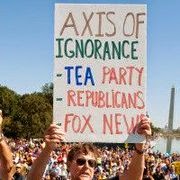 I frequently lament what has happened to the Republican Party, a party that once valued knowledge and at least tried to maintain a veneer of civility and decency.  I once was proud to be a member of the GOP.  Now, to fit in with the party base, one needs to be wearing KKK robes while thumping away on a Bible when not brandishing a gun.  The worse part of it all is that past leaders of the so-called GOP establishment welcomed the lunatic fringe into the party structure and thinly disguised white supremacists and religion fanatics were voted onto party city and county committees.  These nutcases were voted in.  All in the name of short term expediency with no apparent thought to the longer term future. Meanwhile, the sane people exited from the asylum.   Maureen Dowd has a column that looks ate the toxic swamp fever that is now the norm - mainstream if you will - within the GOP.  Here are column highlights:

Rand Paul, the libertarian senator from Kentucky who wants to be the Republican presidential nominee, took almost a day to distance himself from the self-immolating Bundy. Paul was so worried about alienating the segment of the party that will decide the nomination, he couldn’t even respond quickly to say the most simple thing on earth: Racism is bad.

As BuzzFeed reported, Chris McDaniel, a G.O.P. state senator mounting a strong challenge to Thad Cochran in the Mississippi Republican primary, has written blog posts blaming the “welfare dependent citizens of New Orleans” for not finding higher ground during Katrina, charging that “Mexicans” entering the country are hurting “our culture” and calling racial profiling of Muslims a “victory for common sense.”

From cockfighting rallies to online gun sweepstakes to cracks about “wetbacks” to waxing nostalgic about slavery, the Republican fringe has gone mainstream. When the younger stars of the G.O.P. race to embrace a racist anarchist lionized by Sean Hannity, it underscores the party’s lack of leadership or direction.


After making noise about reaching out to women (even as Senate Republicans unanimously blocked a vote on the Paycheck Fairness Act and Republican legislatures around the country pass more abortion restrictions), the G.O.P. now has the delightful Det Bowers out there doing marital counseling. Politico reported that the wacky 62-year-old evangelical minister, who is challenging Lindsey Graham in the South Carolina G.O.P. Senate primary, once asserted that 95 percent of broken marriages are caused by women giving more attention to their children than to their husbands. “He did run off with some other woman, and you packed his bags,” Bowers said, adding: “You just ran him off. You paid more attention to your children than you did to him. ‘Oh, he doesn’t need me?’ He needs you more than they do. He chose you, they didn’t. An abominable idolatry.”

It’s a measure of how hallucinogenic conservatives are that they are trying to re-litigate slavery during the second term of the first African-American president.


In another case of inexplicable foot-dragging, Rand Paul was reluctant to cut loose Jack Hunter, his social media director and co-author on a Tea Party book, after the media wrote about his past life as a shock jock named the Southern Avenger who advocated secession, wore a Confederate flag mask, toasted John Wilkes Booth, and complained that whites are “not afforded the same right to celebrate their own cultural identity” because anything “that is considered ‘too white’ is immediately suspect.”

At Harvard’s Institute of Politics on Friday, Paul said that “The Republican Party will adapt, evolve or die.”   He might want to listen to his own advice.

Given what has happened to the GOP, those who continue to pretend that the party is the same party as that of the parents and grand parents are living in a fantasy world.  The once decent and respectable Republican Party is dead and gone.  Frankly, I don't know how to bring it back.  The nastiest elements of the lunatic fringe were welcomed in and, now, they have become an inoperable cancer.
Posted by Michael-in-Norfolk at Sunday, April 27, 2014