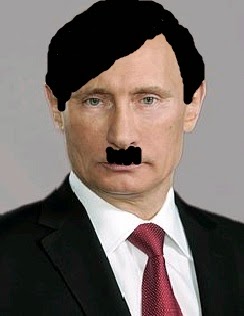 Past posts have touched on Russia's historic sense of "Russia expectionalism" which has simultaneously been combined with a form of inferiority complex that views Russia as not properly respected or given its due place in the world.  Its a bi-polar like pattern that dates back for centuries and of late it has led to unrest and revived dreams of empire on the part of Vladimir Putin who sees imperialistic adventures as a way to distract the Russian people from the failures of his regime.  Rather than look inward, Putin has played the blame game and pointed to the west as Russia's real enemy and sought to pull a veil over the rampant corruption and lawlessness on his own part and that of his circle of cronies and sycophants.   In many ways, what Putin is doing is reminiscent of how Hitler blamed America, France and Britain for Germany's economic problems as he clawed and bullied his way to power.  A piece in the New York Times looks at this syndrome which ought to worry thinking people.  Here are excerpts:

Sergei Karaganov, a prominent Russian foreign policy expert at the Higher School of Economics in Moscow, recently provided a useful summation of his vast country’s sense of humiliation and encirclement. Because explosions of nationalist fervor like the one fostered by Vladimir Putin are dangerous and slow to abate, it is worth quoting this analysis at some length.


“The rupture is due to the West’s refusal to end the Cold War de facto or de jure in the quarter-century since the collapse of the Soviet Union,” Karaganov wrote in the daily Izvestia. “In that time, the West has consistently sought to expand its zone of military, economic and political influence through NATO and the E.U. Russian interests and objections were flatly ignored. Russia was treated like a defeated power, though we did not see ourselves as defeated. A softer version of the Treaty of Versailles was imposed on the country. There was no outright annexation of territory or formal reparations like Germany faced after World War I, but Russia was told in no uncertain terms that it would play a modest role in the world. This policy was bound to engender a form of Weimar syndrome in a great nation whose dignity and interests had been trampled.”

The country being discussed here, it should be recalled, is the world’s largest, a Eurasian power whose Communist empire extended as far west as Berlin for more than four decades after World War II, subjecting peoples to the mind-numbing, soul-poisoning oppression of totalitarian rule under regimes that coerced and confined. The Gulag-littered Soviet imperium was a crushing universe, a “conspiracy of silence,” in the poet Czeslaw Milosz’s words, where “one word of truth sounds like a pistol shot.”Russia is also a nation that, after the fall of the Berlin Wall, was ushered by the West into the group of leading industrialized countries known as the G-8 (before its recent Crimea-related exclusion).

What the United States and Europe were not prepared to do, however, was to eviscerate the Atlantic alliance in the name of some dreamy “Union of Europe” — Karaganov’s phrase — that would bring about “the merger of European soft power and technology with Russia’s resources, political will and hard power.” If this for Moscow was what was meant by the end of the Cold War, it was a nonstarter and still is.


What now? A sense of national humiliation, whether based in fact or not, is a tremendous catalyst for violence. It was in Weimar Germany, where the reparations and concessions stipulated by the Treaty of Versailles of 1919 created an explosive mood. It was in Serbia at the time of the break-up in 1991 of Yugoslavia, a country Belgrade always regarded as a Serbian extension of itself. The blinding fever drummed up by Slobodan Milosevic was based in a supposed need to reassert Serbian greatness; the means then was the ravages of his fifth columnists in Bosnia.

That delirium took a decade to dim. It is unlikely that the Russian version will take less. Putin’s nationalist upsurge is the mask for all sorts of problems — demographic decline, corruption, a coopted judiciary, a cowed press, an oligarchic resource-based economy that has failed to diversify — but no less virulent for that.

In the face of this assertive Russia, nothing would be more dangerous than American weakness. . . . the Article 5 commitment to a joint military response to any attack on an ally is critical.
The U.S. treaties must be words of truth that sound “like a pistol shot,” or violent mayhem could spread well beyond East Ukraine.

Putin is a very dangerous demagogue and the forces he is unleashing to mask his own domestic failures are dangerous.  Sadly, too many Russians are allowing themselves to be duped by this viper just as Germans were under Hitler.   Those who forget and/or refuse to learn from history are doomed to repeat it.
Posted by Michael-in-Norfolk at Friday, May 02, 2014