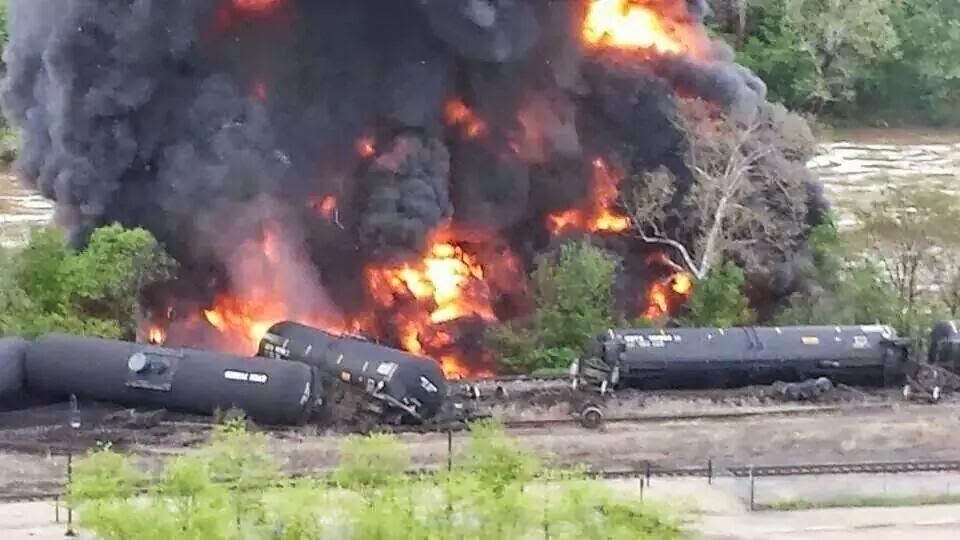 The proponents of unrestricted oil and gas exploration, pipeline construction, and a laissez-faire government approach to regulations of the same - a crowd that includes the Virginia GOP - suffered a possible set back yesterday.   A CSX train carrying fracked oil derailed in downtown Lynchburg setting off a fire storm that cause portions of the city's downtown to be evacuated and dumped 50,000 gallons of the oil into the James River, force the city of Richmond to shift to alternate water supply sources.   The accident is but one of many that highlight the risks associated with pipeline and rail transportation of oil.  The only good news was that no serious injuries or deaths resulted. The Lynchburg News-Advance reports on the mess.  Here are highlights:

About 50,000 gallons of crude oil were unaccounted for late Wednesday after a CSX train derailed in downtown Lynchburg and sent three flaming tanker cars careening into the James River.

The ensuing conflagration ignited oil on the surface of the river, sent flames and smoke hundreds of feet into the air, forced evacuations of downtown businesses and homes and rattled the nerves of hundreds of downtown workers.

Businesses and residences between Fifth and Washington streets and from Main Street to the riverfront had to be cleared for several hours, as firefighters and hazardous materials workers charged toward the blaze.

Evacuees swarmed Main Street, peering around buildings and police barriers, craning for a better view of the disaster that might provide some explanation as to what went so terribly wrong.

The Transportation Department was in the midst of drafting regulations to toughen standards for tank cars used to transport oil and ethanol, as well as other steps prevent or mitigate accidents. But there isn't time to wait for the cumbersome federal rulemaking process - which often takes many years to complete - to run its normal course, Hersman said.

A piece in the New York Times underscores that such derailments are a growing problem.  Here are highlights:

Train traffic carrying crude was relatively rare until four years ago, when oil companies in North Dakota began shipping large quantities of Bakken shale crude out of the state by rail because there was insufficient pipeline capacity to do the job.

Now, much of the production of the Bakken region is sent by rail on trains that can stretch up to a mile long and carry roughly 85,000 barrels of oil.

When a runaway train carrying Bakken crude derailed and exploded last July in the Quebec town of Lac-Mégantic, killing 47 people, the safety issues surrounding the transportation of crude through populated areas rose in importance for both American and Canadian regulators.

Then, in December, an oil train passing through Casselton, N.D., derailed and exploded, sending flames high into the air and forcing some residents to evacuate. That followed an accident in November, when another oil train derailed in Alabama, spilling crude oil.

Many of the trains are destined for refineries on the East Coast, which have a strong desire to replace expensive imported crude from the Middle East and Africa with the high-quality, and less expensive, crude from North Dakota.

In response to the rising concerns, federal regulators and railroads agreed in February to a series of voluntary measures to improve safety, including lower speed limits for oil trains in urban areas, increasing the frequency of track inspections and adding more brakes on trains.

And last week, Canada issued tough new rules requiring emergency plans from railroads on responding to catastrophic accidents and requiring companies to retire older models of tank cars within three years. The new model of tank car, developed in 2011, would effectively set a new standard of safety for rail companies in the United States since many lines cross the United States-Canadian border.

But despite years of discussion, American regulators have lagged on requiring stronger tank cars, which are generally owned by oil companies and private investors, not by railroad companies.

Safety experts have warned for more than 20 years that the older tank cars, called DOT-111s, are prone to rupture in a derailment.