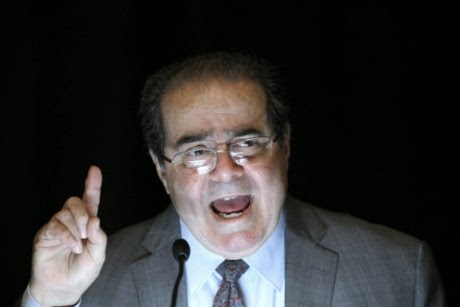 For regular readers it is no secret that I hold Supreme Court Justice Antonin Scalia in low regard and believe that it is far past time that the old bigot retire from the Court.  Scalia makes no effort to hide or disguise his prejudices and religious based bigotry.  Moreover, he makes a mockery of the canons of judicial conduct which govern the behavior of other federal court judges. Now, in the recent Supreme Court ruling that upheld the EPA's regulatory powers, Scalia wrote a dissent that suggest that senility can also be added to the reasons he needs to retire form the Court - or be removed.  Te only oher justice to join with Scalia was that mental midget of all mental midgets, Clarence Thomas.  Talking Points Memo looks at Scalia's major fuck up.  Here are highlights:

It's not often that a Supreme Court justice makes a factual blunder in a formal opinion.

Legal experts say Justice Antonin Scalia erred in his dissent in the 6-2 decision Tuesday to uphold the Environmental Protection Agency's authority to regulate coal pollution that moves across state lines. The Reagan-appointed jurist argued that the majority's decision was inconsistent with a unanimous 2001 ruling which he mistakenly said shot down EPA efforts to consider costs when setting regulations.

"This is not the first time EPA has sought to convert the Clean Air Act into a mandate for cost-effective regulation. Whitman v. American Trucking Assns., Inc., 531 U. S. 457 (2001), confronted EPA's contention that it could consider costs in setting [National Ambient Air Quality Standards]," Scalia wrote in his dissent, which was joined by Justice Clarence Thomas.

The problem: the EPA's position in the 2001 case was exactly the opposite. The agency was defending its refusal to consider cost as a counter-weight to health benefits when setting certain air quality standards. It was the trucking industry that wanted the EPA to factor in cost. The 9-0 ruling sided with the EPA. The author of the ruling that Scalia mischaracterized? Scalia himself.

The conservative justice's error was noted by University of California-Berkeley law professor Dan Farber, who called it "embarrassing" and a "cringeworthy blunder." . . . . "This gaffe is doubly embarrassing because Scalia wrote the opinion in the case, so he should surely remember which side won! Either some law clerk made the mistake and Scalia failed to read his own dissent carefully enough, or he simply forgot the basics of the earlier case and his clerks failed to correct him. Either way, it's a cringeworthy blunder."

Doug Kendall, the president of the Constitutional Accountability Center, a liberal legal advocacy group, said the error was mystifying and very unusual for a Supreme Court justice.

"It is a mind-blowing misstatement of a basic fact of the American Trucking Association ruling which Justice Scalia himself wrote. And it's not just a stray passage -- it's the basis for an entire section of the dissent," Kendall said. "It is very unusual to see a passage that so clearly misstates the fundamental facts of a prior ruling, especially one written by the justice himself."

As I said, if Scalia had any honor and wanted to protect his image in history, he'd resign now.  Sadly, given his hubris and arrogance, that is not what is likely to happen.