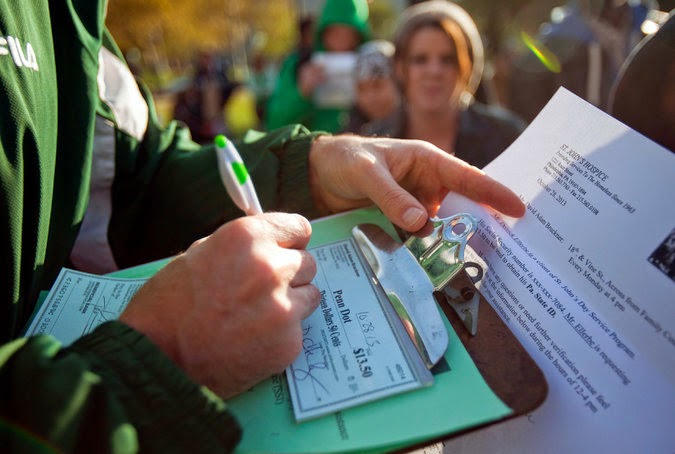 As noted before here, as it panders to dwindling numbers of angry white conservatives, one of the GOP's top agenda items has been to pass voter ID laws and other restrictions that have the effect of disenfranchising the poor and others which the GOP deems likely to vote for Democrats.  Virginia has passed such legislation under the guise of "preventing voter fraud" even though no problem of voter fraud has been documented to exist outside the minds of the GOP base which views only white, conservative Christians as "real Americans."  Yesterday, a federal court saw Wisconsin's voter ID law for what it really was and ruled that it was unconstitutional and in violation of the Voting Rights Act.  Hopefully, the ruling will be the first of many that strike down GOP efforts to disenfranchise citizens. Here are excerpts from the New York Times on the ruling:

Judge Lynn Adelman, of the United States District Court for the Eastern District of Wisconsin, found that the state’s 2011 law violated the 14th Amendment of the Constitution as well as the Voting Rights Act, which bars states from imposing rules that abridge a citizen’s right to vote based on race or color.

“I find that the plaintiffs have shown that the disproportionate impact of the photo ID requirement results from the interaction of the requirement with the effects of past or present discrimination,” Judge Adelman wrote in the decision. “Blacks and Latinos in Wisconsin are disproportionately likely to live in poverty. Individuals who live in poverty are less likely to drive or participate in other activities for which a photo ID may be required (such as banking, air travel, and international travel) and so they obtain fewer benefits from possession of a photo ID than do individuals who can afford to participate in these activities.”

In Wisconsin, the photo identification requirement approved by Gov. Scott Walker and his fellow Republicans who control the State Legislature was already delayed following rulings in state court. But Judge Adelman’s finding citing Section 2 of the Voting Rights Act, more often a factor in cases related to redistricting, is certain to draw note from those involved in other voter identification challenges, including cases brought by the Department of Justice in North .Carolina and Texas . . . .

[O]pponents, who say the laws are really aimed at suppressing the turnout of Democrats, have been buoyed by a series of recent court rulings, including a state court finding in January striking down Pennsylvania’s law and another last week in Arkansas, which found the law there in violation of the state’s Constitution.

[T]he order posed an immediate challenge for state Republican leaders who had earlier indicated they might soon call a special session to approve a revised law — one that could presumably pass court muster and go into effect before this year’s elections, which include the governor’s race.

Judge Adelman enjoined the state from requiring voters to provide identification cards, and required officials to seek legal approval of any revised law. The judge pledged to expedite hearings on any rewritten law, but wrote that “it is difficult to see how an amendment to the photo ID requirement could remove its disproportionate racial impact and discriminatory result.”

Posted by Michael-in-Norfolk at Wednesday, April 30, 2014