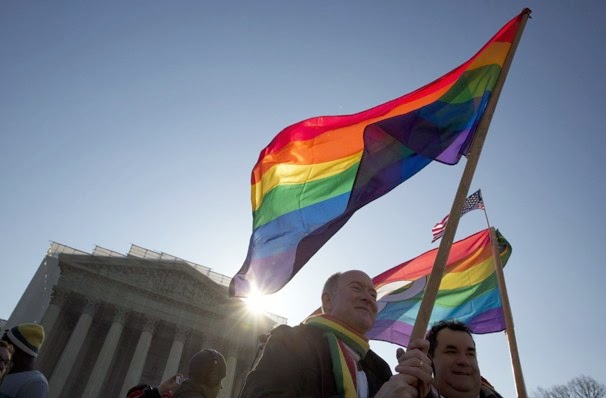 Here in Virginia corporations were not so long ago barred from offering domestic partner insurance benefits unless the corporations were large and basically self-insured.  What changed this?  Large corporations, including Capital One, demanding that the Virginia General Assembly repeal the ban and allow corporations to be competitive in recruiting the best talent and employees.  Another example of corporate America's blow back against anti-gay bigotry is the reason debacle in Arizona where GOP governor Jan Brewer was forced to veto a GOP backed bill.  Sadly, the Virginia GOP still has not gotten the larger message.  A piece in Metro Weekly looks at how corporate America has become, whether for the right reasons or not, become one of the LGBT community's most powerful allies.  Here are highlights:

While the debate over LGBT equality may continue to take place among the general electorate, that debate has reached its conclusion among corporate America. To be anti-gay increasingly means to be anti-business.

According to Deena Fidas, director of the Workplace Equality Program for the Human Rights Campaign Foundation, the game-changing moment came when New York lawmakers approved marriage-equality legislation in 2011.

"That was really the first time there was a breakthrough of this being a relative fringe area of corporate support," Fidas tells Metro Weekly, noting that during the fight against Proposition 8 in 2008 only a handful of businesses weighed in. However, thanks to a collaborate effort by a number of LGBT-rights organizations, about 40 businesses from Wall Street to upstate New York publicly voiced their support for the state's same-sex marriage bill.

The tidal shift is apparent with adoption of nondiscrimination policies as well. In 2002, when HRC launched its Corporate Equality Index, which has come to serve as the national benchmark tool on corporate LGBT policies, only 13 businesses achieved a perfect score. In 2014 that number stands at 304 businesses. Among Fortune 500 companies, 91 percent have nondiscrimination policies that include sexual orientation and 61 percent include gender identity. Sixty-seven percent offer equivalent medical benefits between spouses and partners and 28 percent offer transgender-inclusive health care benefits, including surgical procedures.

While the adoption of such inclusive policies has been on the rise, major corporations have also now begun to take their views on LGBT-rights out of the boardroom and into the public square. A month before the U.S. Supreme Court heard oral arguments in the challenge to the Defense of Marriage Act's federal definition of marriage as between a man and a woman, in March 2013, nearly 300 businesses and city governments, including major businesses such as Amazon, Apple, Microsoft, Twitter, Starbucks, Morgan Stanley, Google and cities from Baltimore to Los Angeles, filed a brief with the Supreme Court calling for DOMA be struck down as unconstitutional. The brief argued in part that DOMA hurts workplace efficiency and employee morale, and thus forces employers to participate in the injury of their own workforce morale.

[W]hile many of these businesses have expressed a desire to be on the right side of history, their decision to take action on issues of equality is just as much pragmatic.

"As they've learned, there are a lot of very practical implications for businesses when we have uneven laws. There were very material challenges they were having to reconcile with differing state and federal tax systems," Fidas says. "So while there's certainly a more social justice and equality case to be made, there were also these very real administrative costs that were going toward renovating these uneven laws and how they impact the implementation of things like domestic partner benefits."

But perhaps the greatest example of how powerful an alliance the LGBT community has forged with corporate America came this past February when lawmakers in Arizona approved anti-LGBT legislation that would have effectively made it legal for businesses to turn away customers due to their religious beliefs.

Brewer isn't the first member of a party with deep ties to the business community to find herself siding with equality following pressure from the nation's most profitable companies. Hedge fund billionaire Paul Singer, whose son is gay, has invested millions of dollars into forging GOP support for issues such as LGBT workplace protections and marriage equality. More than 120 leading U.S. employers have joined HRC's Business Coalition for Workplace Fairness supporting passage of the Employment Non-Discrimination Act (ENDA).

"My interactions with business leaders have shown me that corporations want to attract the broadest pool of talent possible," says Angelo. "When there are exclusionary policies explicitly stated in state laws or constitutions, or the absence of inclusionary policies as part of company policy, they find less of a chance to attract talented workers who also happen to be LGBT."