What I Peter Was Never Bishop of Rome? 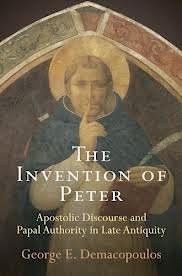 Maybe I just enjoy being perverse at times, but it can be most entertaining when new scholarship and historical research turns religious dogma and Church propaganda on its head.  We've seen the conniptions on the part of Christian fundamentalists and leaders of the Southern Baptist Convention as they deal with the fallout of the findings of the human genome project that indicate that Adam and Eve never existed as depicted in the Bible and the follow up that, if Adam never existed, then mankind never experienced The Fall.  Hence no need for a messiah in the form of Christ.  On a much smaller scale, a new brouhaha may be brewing surrounding the claim that the Popes of the Roman Catholic Church derive power as the direct successors of St. Peter, long credited as being the first bishop of Rome.  But what if that story isn't true?  A piece in The Daily Beast looks at the case to be made that Peter never was in Rome much less served as its first bishop.  Here are excerpts:

[W]hat if Peter never went to Rome and was never the first Bishop of Rome? What if the idea of a Supreme Pontiff emerged hundreds of years after Peter’s death?

This is precisely what a new book by Fordham University theology professor George Demacopoulos proposes. In The Invention of Peter, Demacopoulos argues that Peter never visited the city of Rome, never founded a church there, and was not the first Pope. In fact, the very idea of Peter as the Supreme Pontiff and leader of a worldwide church is a much later idea that took its rise in the ecclesial politics of the fifth century.

The evidence for Peter visiting—much less dying in—Rome is pretty thin on the ground. It simply never comes up in the New Testament: the Acts of the Apostles, our first history of the Jesus movement, never mentions Peter journeying to Rome. And when Paul nervously greets the Christian community there in his Letter to the Romans, he never refers to Peter’s presence in the city. In the two letters attributed to Peter in the New Testament the author is said to be writing “from Babylon.” Babylon could be a euphemism for Rome or it could just be a metaphor for imagined exile.

The earliest references to Peter’s presence in Rome come from the second century and from texts that appear to have been written in Asia Minor. There are no first-century documents that explicitly state that Peter died in Rome. Much less any Christian authors talking about Peter and Peter’s heirs as commanding special power over the church.

While it might sound like the stuff of which Da Vinci Code scripts are made, this is neither conspiracy theory nor contemporary scholarship reduced to a sensationalist tacky mess. The Invention of Peter is not the first book to question the role of Peter and the foundations of the Papacy. In a book that created quite a stir in Catholic circles in his native Germany in 2010, Otto Zweirlein also argued that Peter never went to Rome. And the shadowy origins of papal memoirs and biographies have already been exposed by U.K.-based scholars Kate Cooper and Julia Hilner.

What Demacopoulos adds to our knowledge is an understanding of why the idea of a Supreme Pontiff emerged in the fourth century and how appeals to papal authority worked. And this is where things get interesting. Generations of Catholic schoolchildren may have learned that Jesus gave Peter the keys to the kingdom of heaven in Matthew 16, but early Christians didn’t give the passage second thought until the fourth century. It was only with Pope Leo the Great in the fifth century that the Bishop of Rome started to cite Matthew 16 as proof of Papal supremacy, and characterize himself as the “heir” of Peter.

The context in which Pope Leo invoked his authority as descendent of the Apostle was in conversations with other bishops. Pope Leo and, later, Popes Gelasius and Gregory the Great called themselves heirs of Peter when they were trying to control, diminish, or outwit other rival Church leaders.
What this means is that the idea of popes as descendants of St. Peter is about controlling bishops, not churchgoers.

Demacopoulos is on solid ground when he writes that “so much of the way we think about the early papacy and the individual bishops of Rome has been shaped by later papal activists who were eager to spread Roman influence in their own period.”

The reality is that the history of the Church from its outset was more often about fights over power, authority and money.  And manipulating and rewriting texts to support various players' agendas.  The absolute, honest truth and real history time and time again thrown out the window to support ambitious church leaders who focused first on money and power.  The actual Gospel message was important only to the extent t could be used to manipulate and control others, especially rivals.   Unfortunately, those who have been brainwashed since childhood all too often don't realize that they (and their parents and grandparents) have been hoodwinked with myths and revised history.