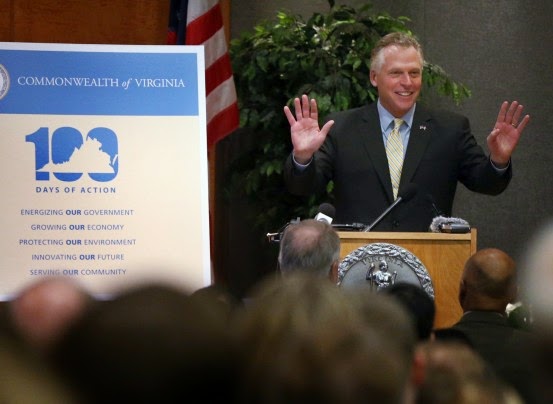 The Republican Party's war of the poor which is evidenced by things such as Paul Ryan's proposed budget which give trillions in tax cuts to the wealthy and business while destroying the social safety net is best exemplified here in Virginia by the Virginia GOP's refusal to sign onto Medicaid Expansion.  Indeed, the Virginia GOP would prefer a state government shutdown over expanding Medicaid to 400,000 currently uninsured Virginians.  Even though the funding would come from taxes Virginians have already paid to the federal government.   And even though the Virginia Senate plan -  the "Marketplace Virginia"  - is a private sector solution which has been endorsed by the Virginia Chamber of Commerce, the major newspapers in Virginia (including the conservative Richmond Times-Dispatch), and the Washington Post. Meanwhile, dripping hypocrisy, these Virginia Republicans pretend to honor "Christian values" while shredding the Gospel message of assisting the poor, the sick and the homeless.  Faced with such cold hearted, perhaps racist based obstructionism, Governor McAuliffe is exploring ways to expand Medicaid without the cooperation of the party of "No."  Here are highlights from a Washington Post piece that looks at the situation:

Virginia Gov. Terry McAuliffe is considering expanding health coverage for the poor without the approval of the state legislature, a move that would muscle his top priority past Republican opponents but also throw his young administration into a partisan firestorm and uncertain legal territory.

McAuliffe and his top advisers have consulted lawyers, health-care experts and legislators on how to bypass the GOP-dominated House of Delegates, according to three people familiar with the discussions. A fourth, who like the others spoke on the condition of anonymity because they were not authorized to reveal private strategy, said the office of Attorney General Mark R. Herring (D) has been researching the matter.

The move would allow Virginia to take advantage of a key state option under the Affordable Care Act, and it could help break a budget stalemate and avert a looming government shutdown. But it would be a daring action; only two other governors have done anything similar to bulldoze Medicaid expansion past opponents.

If McAuliffe follows through, he would raise far-reaching constitutional questions about the chief executive’s power and the rule of law — issues cropping up with increasing frequency in the states and in Washington, as governors and President Obama seek to push past adversarial legislatures and Congress.

Expansion by executive action might be more difficult in Virginia, where the state constitution requires the legislature to approve all appropriations — even pass-through funding from Washington, which has promised to foot the full bill for Medicaid expansion for the first three years.

For months, while still pushing for expansion through the General Assembly, McAuliffe advisers have been searching for a solution even if the House won’t go along, the three people familiar with those discussions said. They’ve picked the brains of health-care advocates and assured expansion-minded legislators that they are “exploring their options,” as one person familiar with those discussions put it.

House Republicans have grown increasingly vocal about the possibility, particularly after Herring bucked the General Assembly’s wishes this week by declaring that some young illegal immigrants are eligible for in-state tuition. Three months earlier, Herring had announced that the state’s ban on gay marriage — something the legislature still supports — is unconstitutional.

Independent of the governor, some health-care experts have been looking for months for a way for McAuliffe to make expansion happen on his own, according to two people familiar with those discussions. They considered whether the governor could stack the state’s Medicaid board, which sets eligibility standards, with his own appointees. They wondered whether McAuliffe could expand Medicaid by claiming emergency powers, perhaps in the event of a looming hospital closure or the government shutdown.

Where things will end is anyone's guess.  Sadly, the cynic in me suspects that if the Affordable Health Care Act and the attendant expansion of Medicaid had been backed by a white president rather than one who is black, we likely would not be having this controversy.  Today's Virginia GOP has become little more than a defacto white supremacist organization with a leavening of insane religious extremists for good measure.  The Virginia GOP may wrap itself in religion, but it has become the antithesis of true Christian values.