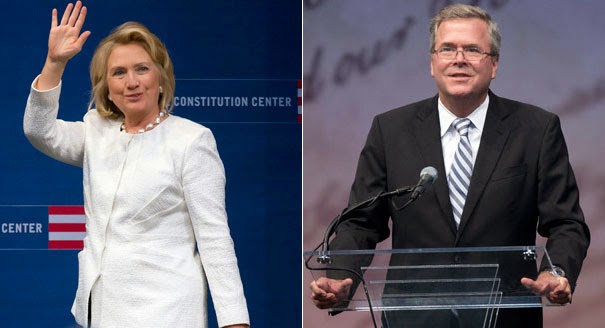 As prior posts have note, some in the GOP - especially Wall Street figures - are hoping that Jeb Bush will throw his hat into the 2016 GOP presidential contest and "rescue" the GOP.  This thinking, of course, ignores the toxicity of Chimperator George W. Bush's legacy outside of select Kool-Aid drinking GOP circles. Now, a new poll shows that while Jeb Bush beats other GOP competitors, Hillary Clinton trumps them all.  Here are excerots from Politico:

Jeb Bush has a strong lead in Florida among potential 2016 Republican presidential contenders — but Hillary Clinton’s got them all beat, a new poll Thursday found.

According to the Quinnipiac University poll, 27 percent would back Bush for the White House, earning him a sizable lead over the rest of the GOP field.

Kentucky Sen. Rand Paul came in second with 14 percent, beating out Florida Sen. Marco Rubio, who came in third at 11 percent. No other candidates received more than 6 percent support.

The poll comes amid rising speculation that Bush, the governor of Florida from 1999 to 2007, might run for the GOP nomination in 2016.

The poll showed Hillary Clinton doing well in Florida, as well. She topped all potential GOP challengers in a head-to-head race. In a potential faceoff between her and Bush, she received 49 percent support compared to 41 percent support for the former governor.

This gives me hope that I might one day retire to Florida!