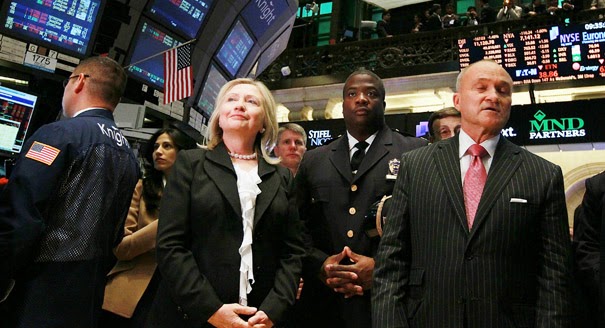 Obstructionism, deliberate efforts to sabotage the economy and religious lunacy are not good for business - at least not unless one is a professional Christian/shyster like Tony Perkins and similar "family values" group leaders.  And with no clear cut GOP front runner for 2016, Wall Street Republicans are hedging bets on who they would like to see in the White House come January 2017.   Based on a piece in Politico, the Wall Street players do NOT want one of the darlings of the spittle flecked, knuckle dragging GOP base.  They view such GOP extremists with alarm, and rightly so.  Thus, if that's what the GOP nominee is like, they'd rather see a Hillary Clinton victory.   Here are article excerpts:

The biggest parlor game on Wall Street and in corporate boardrooms these days is guessing whether former Florida Gov. Jeb Bush will run for president and save the GOP’s old establishment base from its rising populist wing.

The second most popular game is guessing what happens if Jeb says no.

Most donors and Wall Street titans have not lined up with any candidate yet, waiting for the field to take shape after the midterms. But if Bush doesn’t run, the list of Republican saviors could be short.
The darkest secret in the big money world of the Republican coastal elite is that the most palatable alternative to a nominee such as Sen. Ted Cruz of Texas or Sen. Rand Paul of Kentucky would be Clinton, a familiar face on Wall Street following her tenure as a New York senator with relatively moderate views on taxation and financial regulation.

“If it turns out to be Jeb versus Hillary we would love that and either outcome would be fine,” one top Republican-leaning Wall Street lawyer said over lunch in midtown Manhattan last week. “We could live with either one. Jeb versus Joe Biden would also be fine. It’s Rand Paul or Ted Cruz versus someone like Elizabeth Warren that would be everybody’s worst nightmare.”

Most top GOP fundraisers and donors on Wall Street won’t say this kind of thing on the record for fear of heavy blowback from party officials, as well as supporters of Cruz and Rand Paul. Few want to acknowledge publicly that the Democratic front-runner fills them with less dread than some Republican 2016 hopefuls. And, to be sure, none of the Republican-leaning financial executives are so far suggesting they’d openly back her.

[T]he donors, financial executives and Washington representatives offered a consistent refrain: If we can’t nominate someone like Bush or Christie from the pro-business wing of the party, and if the GOP nominee is from the far right, then we will hold our noses and tolerate Clinton.

“Most people in the industry find her approachable and have a track record with her,” one Republican financial services executive said. “They wouldn’t align with her on every policy, but they won’t view her as hostile to the sector. If it turns out to be Hillary walking away with it, there would not be any panic.”

This line of thinking is a direct response to fiery rhetoric from people like Rand Paul, who used the 2013 CPAC conference in Washington to rip the financial industry, saying “there is nothing conservative about bailing out Wall Street.”

Ted Cruz, whose wife works at Goldman Sachs, is viewed negatively by many in the industry for his support of last year’s government shutdown and scorched earth approach to political battle.

That kind of talk leaves some rich people contemplating the notion of supporting Clinton in what would amount to a reversion to 2008, when Wall Street money went nearly 2 to 1 for then-Sen. Barack Obama over Sen. John McCain. Even those who could never back her don’t see her as a huge threat to the business community.