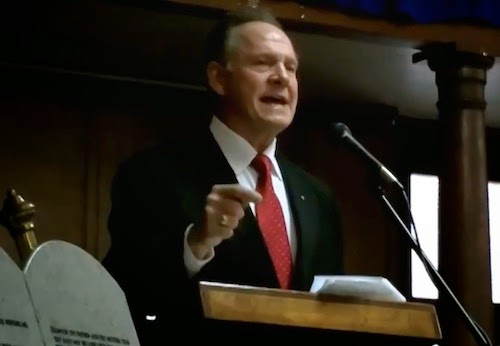 As noted before, I lived in Alabama from 1977 through 1981 and the Alabama of today is far more insane that the one I experienced over three decades ago.  What accounts for the change?  The same thing that has led the Republican Party into crazy land territory:  the rise of the Christofascists who were allowed to hijack the GOP and drive sane people from the party.  Having once met George Wallace while he was governor, Wallace was almost a liberal/moderate compared to what passes as "normal" in the Alabama GOP.  Case in point?  Look no farther than Alabama Chief Justice Roy Moore who, given Alabama's elected judiciary, has recaptured the position he was forced from not that many years ago.  Moore's latest batshitery is to claim that First Amendment to the U.S. Constitution only protects Christians.  The man belongs in an insane asylum, not Alabama's highest Court.  The New Civil Rights Movement looks at Moore's shocking claims (he also slams gays and gay marriage).  Here are excerpts:

The Chief Justice of the Alabama state Supreme Court traveled to Mississippi to deliver a speech in front of the Pastors for Life Luncheon, which was sponsored by a “pro-life” organization known for getting the Magnolia State’s abortion clinics shut down. Judge Roy Moore told the very receptive group that the First Amendment only protects Christians, and expressed his offense that same-sex military couples are now getting married at U.S. military bases.

The Chief Justice went on with his religious attacks, claiming that the First Amendment to the U.S. Constitution applies only to Christians. “Buddha didn’t create us, Mohammed didn’t create us, it was the God of the Holy Scriptures on which this nation was founded,” Moore proclaimed.

Moore infamously lost his position as Chief Justice in 2003 after refusing a federal judge’s order to remove the Ten Commandments from his courthouse. A decade later, he was re-installed after running for and winning re-election. In 2012, while running his campaign, Moore went out attacking gay people, claiming same-sex marriage will be “the ultimate destruction of our country.”

Moore also traveled recently to Washington state, fueling rumors that he might again be laying groundwork for a presidential campaign.

Not to sound mean spirited, but I increasingly think that far right Christians - and certainly Judge Moore - suffer from a form of mental illness given their hysterical need not to have anyone or any thing challenge their ignorace embracing religious beliefs.  These folks pose a clear and present danger to constitutional government in America.
Posted by Michael-in-Norfolk at Saturday, May 03, 2014