The Barbarism and Obscenity of Sarah Palin and Her Supporters 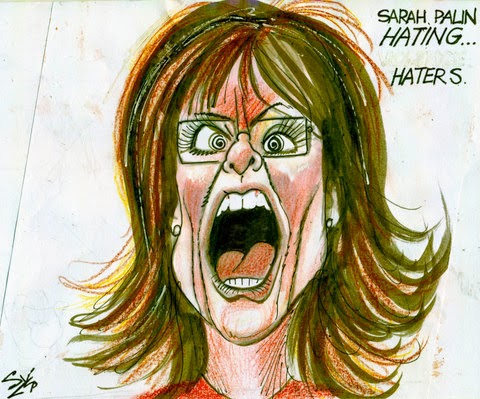 No matter what else he does during the balance of his remaining political career, John McCain will forever be remembered as having unleashed on America one of the most obscene, barbaric and false Christians to have ever carried the GOP standard: Sarah Palin.  Not only is the woman a mental midget in may ways, but she has pulled many in the GOP base down into a fetid swamp of hate, prejudice and advocacy for torture and war crimes.  Perhaps the only individual as bad or worse than Palin is the monstrous Dick Cheney, a/k/a Emperor Palpatine Cheney on this blog.  What's perhaps more frighten than Palin herself, however, is the fact that (i) her support of torture and war crimes is now mainstream among white evangelicals and (ii) few in the Republican Party have dared condemn her and/or argue  that decent Republicans need to shun her.  Palin - and her Christofascist supporters - has reached a new low in her recent support of torture and equating water boarding to "baptism for terrorists."  Andrew Sullivan takes Palin to task in a post.  Here are highlights:

If you want a classic example of political Christianism – and its active hostility to spiritual Christianity – it’s hard to beat Sarah Palin’s remarks yesterday. I offered a brief response last night, but this obscenity needs to be unpacked some more. And the first thing to say is that a former US vice-presidential candidate did not just endorse a war crime; she endorsed it as routine for every human being suspected of terrorism. And she seems to endorse it as an introduction to captivity. “Waterboarding is how we baptize terrorists” is a glib statement but a revealing one.

She believes that torture should be the first resort – a sign of how America treats its foes, a badge of honor. What can one say but that this is a bona fide fascistic sentiment. It revels in violence against individuals tied down by their hands and feet and strapped to a terrifying board in order to be suffocated hundreds of times to near-death. It is the kind of statement you might expect from the Khmer Rouge, or from the Chinese Communists who perfected “stress positions”, or from the Nazis, whose Gestapo pioneered “enhanced interrogation”, i.e. brutal torture that would leave no physical traces. Except it’s worse than that. Even totalitarian regimes have publicly denied their torture. Their reticence and lies are some small concession of vice to the appearance of virtue. Not Palin – who wants to celebrate brutal torture as the American way.

And then she manages to go one step further. She invokes torture in the context of a Christian sacrament. Not since the Nazis’ Deutsche Christen have we seen something so disgusting and blasphemous in the morphing of Christianity into its polar opposite.

It reveals that vast swathes of American Christianity are objectively anti-Christian, even pagan, in their support for this barbarism. Rod should know this by now. In the best recent polling on the question, 62 percent of white evangelical “Christians” back torture as often or sometimes justified, with only 16 percent holding the orthodox position that it is never justified. Now compare those numbers with Americans who are unaffiliated with any religion: the number in that demographic is 40 percent in favor in some or many cases, and 26 percent against it in all circumstances. Is this a function of wayward and uncommitted Christians? Nope. Support for torture is highest among those who attend church at least weekly and lowest for those who rarely or never go to church. In America, torture is a Christian value. And some people wonder why I prefer to term “Christianist” to describe these people.

[T]orture is a far graver evil, even for orthodox theologians, than non-procreative or non-marital sex. And yet today’s Christianists are obsessed about the latter and not just indifferent to the former, but actually in favor of it. It’s this twisted set of priorities, this exquisitely misplaced set of fears, and this utter ignorance of even basic Christian teaching that reveals all that’s so terribly wrong with American Christianity. It has become its own nemesis.

As I have said before, conservative Christianity has become an abject evil.   Despite their posturing and self-congratulation, conservative Christians are, in my view, among the most immoral members of the population.  Decent people - and decent politicians - need to shun these Christofascists the way lepers were shunned in the Bible.  They are a menace and will be the cause of Christianity's death.