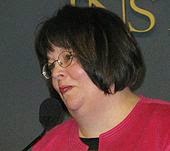 If one wants to the face of someone who has enriched themselves disseminating hate, look no farther than former head of the National Organization for Marriage ("NOM") - here in Virginia, our mini queen of hate is Victoria Cobb - who drew nice six figure incomes demonizing gays and spreading religious based hatred.  Now, in a recent column, Gallagher laments that the battle against gay marriage is all but lost.  She then, of course, shifts into would be Christian victim role whining that Bible believing Christians will be facing likely persecution for their beliefs.  Here are highlights from Gallagher's lament:


What I am advocating doing is three very big, and very hard things: a) accepting where we are and b) learning from what we did not succeed in so that we can get to c) how do we build anew?

Right now most people who believe in the classic understanding of marriage are in shock, they are awed by the powers now shutting down the debate and by our ineffectualness at responding to these developments.

The version of America we were born into is no more. For the first time in American history being a faithful Christian (or Jew or Muslim) now calls into question in the public square in a new way one’s good citizenship.

The rapid collapse of opposition to gay marriage we are witnessing did not just happen, and it was not inevitable. But it is.

The question now on the table is: will orthodox Christianity (and other traditional faiths), be stigmatized and marginalized as the equivalent of racism in the American public square?  Will Biblical morality be wiped out as an acceptable public position in America?
Or will we regroup, rebuild as a subculture, and survive to become the possibility of a new foundation in the future?

Hiding or pretending is not going to help us, now.  We have to face the truth.

[Charles] Cooper [who defended Proposition 8] said two things that upset many people on our side: “My views evolve on issues of this kind the same way as other people’s do, and how I view this down the road may not be the way I view it now, or how I viewed it ten years ago,” he said to Jo Becker some months ago.  And when the book became public and the news of his stepdaughter’s wedding came out he told AP:  ““My daughter Ashley’s path in life has led her to happiness with a lovely young woman named Casey, and our family and Casey’s family are looking forward to celebrating their marriage in just a few weeks.”

And here is the thing I take away, and what I want you to take away, from the Charles Cooper story: . . . . There is no line we can draw that pushes gay people “outside” and leaves us free “inside” to be angry, foot-stomping, and morally “pure.”

Next, Brendan Eich and Mozilla. Here we face the fist within the velvet glove—one of the few public instances of what is happening all over America.

We live in an America in which standing up for Biblical morality (or its common sense moral analog) puts your employment in jeopardy.  How will we respond to the fear this inspires?  Will we recognize we are a subculture now facing a dominant culture and build subculture strategies?

[T]the first struggle we now face is internal and spiritual:  Will we accept the newly dominant culture’s view of our views—of ourselves—as hateful and bigoted and stand down?   Or will we, first of all in our heart and minds, refuse to accept this external view of ourselves.  Will we stigmatize ourselves or will we force the powerful to do that to us?

Christian conservatives have been doing politics stupidly and on the cheap.   If we keep doing politics this way we will soon not have to do politics at all.   To win a space for us at the American table, we are going to need to invest large amounts of money in new and directly political institution—organizations capable of unelecting those who would shut us out, and those capable of rewarding the courage of those who agree with us.

I have little doubt that Maggie will be at the tough of money that she is saying that the Christofascists need to spend.  She enjoys living the good life without having to have a real, socially productive job.   Like most of the professional Christian crowd, she's little more than a parasite living off of the ignorant and uneducated.