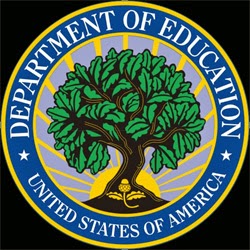 While many states give lips service to protecting LGBT public school children, in states like Virginia, true protections are nearly non-existent and time and time again we see teachers and administrators failing to act and/or looking the other way as LGBT students are bullied and/or subjected to discrimination.  Now, an announcement by the U.S. Department of Education ("DOE") may put new pressure on schools receiving federal funding to actually take action.  Specifically, the DOE's Office of Civil Rights has issued guidelines underscoring that Title IX of the Education Amendments of 1972 (“Title IX”) to the federal civil rights laws that prohibits discrimination on the basis of sex in federally funded education programs and activities applies to LGBT students and transgender students in particular.  The 53 page document can be found here.  Here are highlights from a statement by the National Center for Transgender Equality:

The guidance, from the Department's Office for Civil Rights (OCR), states: "Title IX's sex discrimination prohibition extends to claims of discrimination based on gender identity or failure to conform to stereotypical notions of masculinity or femininity and OCR accepts such complaints for investigation."

"This announcement is a breakthrough for transgender students, who too often face hostility at school and refusal by school officials to accept them for who they truly are," said NCTE Policy Director Harper Jean Tobin. "It is now clearer than ever that schools nationwide are responsible for ensuring that transgender students are respected and safe, and students can seek protection from the Department of Education and the courts if schools fail to do so."

...This historic statement on gender identity is embedded in a larger guidance document on the responsibilities of schools to prevent and respond to sexual violence against any studentâ€”part of a package of guidance and resources announced by the Obama Administration today to address this widespread problem. Also being launched is a new website, NotAlone.gov, collecting resources for students and schools and reporting settlements with schools related to sexual violence on campus. NCTE applauds the White House Task Force to Protect Students from Sexual Assault and the federal agencies involved in this effort.

"Sexual violence in schools is shockingly common in the U.S. and needs to stop," said NCTE Executive Director Mara Keisling. "That the Federal Government is addressing sexual violence is so important. And it is also important, and honestly a relief, that the Department of Education is clarifying Title IX in a way that will make schools safer for transgender students."

It goes without saying that the Christofascists will not be happy and will likely view this as another instance of their religious freedom - i.e., unrestricted license to persecute others - as being  under attack.