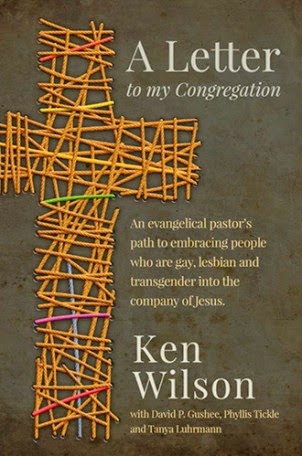 A new book by evangelical pastor Ken Wilson must have many Christofascists rending their clothes and dropping to the ground in spittle flecked convulsions.  And yes, there will be loud shrieks of heresy.  Wilson's sin?  Predicting that full LGBT inclusion within Christianity is inevitable.  Wilson tosses the disingenuous slogan "hate the sin, love the sinner" so favored by misnamed family values hate groups  down the toilet where it belongs.  While Wilson attributes his changed position to a reconsideration of scripture, it's also likely that Wilson sees that anti-gay hate is killing the Christian brand outside of the bubble of professional Christians who use anti-gay animus as a principal fundraising tool.  Religion Dispatches looks at Wilson's book which will no doubt cause incalculable distress on the part of Virginia's queen of hate, Victoria Cobb at The Family Foundation.  Note how Wilson uses the issue of divorce to highlight the hypocrisy of those who refuse to accept gays.  Here are excerpts:

It's a familiar story: A church is torn apart by a moral issue. On one side, a group is arguing for strict adherence to scripture; on the other side, members argue that biblical adages were meant for an earlier time.

The story is so familiar, in fact, that it is actually in the Christian scriptures.  Paul's ancient answers to congregational controversies inform a new book written by Ken Wilson, an evangelical pastor in Michigan. In A Letter to My Congregation Wilson argues that the ancient issues of food and Sabbath are analogous to today's moral struggle over the rightful place of LGBT people in both church and society.

As a pastor in a conservative denomination, Wilson's journey from a "consensus" approach to full acceptance for LGBT people has not been easy. But just as a lot was at stake in Paul's era, so too in today's culture wars. The answer Wilson offers is the same one Paul offered those in Rome: stop judging one another and live in peace.

Wilson spoke with Religion Dispatches' Candace Chellew-Hodge about the book and how it's being received.

What prompted you to write this book?
I had been doing a rethink on this question for a number of years and my convictions had changed but I didn't know how to process it in the congregation at that stage. I had processed it with the church board and pastoral staff and different leaders.

You said you've gotten to know some LGBT people over the years. How did that change your thinking?
Growing up in the '50s and '60s in Detroit, I didn't know any gay people who were out, so it was all undercover and I was just naïve. As a younger pastor, I was in a renewalist community and the gay people I knew there all regarded their same-sex attraction as a temptation they were trying to resist.  I was just taking their story on its face and had no experience understanding about it; I inherited the traditional consensus on the question and never really examined it.

It was probably in the early 2000s,  when our church started in the college town of Ann Arbor, that I started to hear different stories. People from the church quietly asked me in the lobby about what I thought about this because they had a  sister who was gay or a parent had come out as gay and many adolescent children were dealing with the question.

What I knew about the traditional consensus and biblical texts did not seem to fit the people that I was meeting.

How has your more evangelical audience reacted?
The initial response to the book has been largely positive, but I think that's because of the subtitle: "An evangelical pastor's path to embracing people who are gay, lesbian and transgender into the company of Jesus," signals where it's going. The people who are reading it then, are fairly open minded on the question or understand it's an issue that needs to be wrestled with, whereas the entrenched conservatives are just dismissing it.

I'm not expecting to be embraced warmly by mainstream evangelicalism on this. Evangelicalism has bought into what I think is the demonic reality that somehow this is the defining moral issue of our time and is the litmus test for orthodoxy. Given that, I believe there will be a lot of out-of-hand dismissal of the book.

There are a number of evangelicals that are very open to this and are having the same experience I had of actually knowing gay and lesbian people, so I think it's inevitable.

If there are congregations like ours that can demonstrate that you can survive financially, then I think there will immediately be a small, steady trickle of congregations moving in this direction and that will develop into a stream. Certainly, in five years, I think we'll see that.

I like how you use divorce as an example of how radically the church has changed in regards to moral issues.

I've been surprised at how often my colleagues will dismiss this argument. What they fail to recognize is that the biblical teaching on remarriage is very strict. The issue is not when a divorced person remarries they commit one act of adultery, the issue biblically is that they are married to someone else's spouse, so the nature of their relationship is extra-marital and outside the bounds of holiness. It is precisely analogous to the question of same-sex sexual relationships.

So, ongoing adultery is the issue around divorce, but with the rise of the divorce rate the church realized if they applied the teaching in that way it was harmful to people.

There is a strong tradition in Christianity that love does no harm, and love your neighbor as yourself, so this is an important interpretive lens. I think the Bible is really on the side of acceptance of LGBT people.

Do you think marriage equality is inevitable for gay people?
Yes, because American culture values equality.

I love the references to divorce.  I know conservative Christians who have divorced and remarried yet refuse to admit that they are ongoing adulterers if one reads the Bible literally.  Their hypocrisy when they condemn gays is breathtaking.