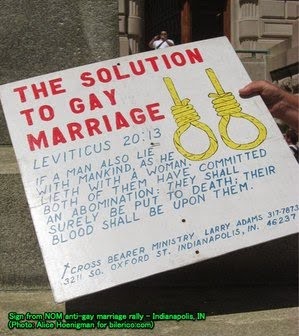 In the wake of the Brendan Eich debacle at Mozilla a number of gay conservatives, including Andrew Sullivan, and the in my view always slimy Ken Mehlman who assisted George W. Bush's anti-gay marriage campaign, have signed a pledge that protests against "intolerance" based on individuals' political and/or social views.  These individuals would have one believe that Eich was a martyr for free speech.   The problem is that if taken to its logical conclusion, then there should be no accountability for those who support racists views, antisemitism, Neo-Nazi beliefs and a host of other forms of bigotry.  Yes, individuals are free to hold whatever views that the want, but that does not mean that the rest of us have to overlook their nastiness.  A piece in Think Progress expands on the wrongheadedness of the so-called pledge.  Here are excerpts:


Since Brendan Eich resigned as CEO of Mozilla because of his donation to the Proposition 8 campaign, many have continued to debate whether public figures should be held accountable for their anti-gay activism. A new effort under the banner of “Freedom to Marry, Freedom to Dissent,” which seems to be driven by pro-LGBT conservatives, argues that “disagreement should not be punished” because “disagreement is not, itself, harm or hate.”

The public statement compares Eich to Frank Kameny, an early gay rights activist who lost his job because of his sexual orientation, suggesting that those who celebrate Eich’s departure are engaging in the same kind of discrimination. “Like [Kameny],” the statement concludes, “we place our confidence in persuasion, not punishment.”

This “Freedom to Dissent” pledge essentially justifies anti-gay advocacy. Ilya Somin, writing for The Volokh Conspiracy at the Washington Post, ironically illuminates this reality while explaining why he felt he couldn’t sign it:


I felt unable to sign the petition when asked, because there are some parts that might be construed as claiming that it is never appropriate to fire people for their political views. For example, at one point the statement asserts that “the consequence of holding a wrong opinion should not be the loss of a job.” I think this is true in the vast majority of cases, but not always. For example, few would object if Eich had been fired for donating money to the KKK or a neo-Nazi organization – even if he had otherwise performed his duties well, and had never mistreated any of Mozilla’s black or Jewish employees. Despite some deplorable PC excesses, overall the effort to stigmatize racism and Nazism has produced some beneficial results.

In other words, supporting racism and anti-Semitism would be deplorable, but supporting laws that discriminate against the gay community is forgivable. This double standard not only justifies homophobic thinking, but also placates the narrative put forth by opponents of equality that the LGBT movement consists of bullies.

For example, Fox News’ Bill O’Reilly claimed on his show this week that gay rights activists are threatening to “harm,” “hurt,” and “intimidate” marriage equality opponents, though he couldn’t cite a specific example of such tactics. The American Family Association sent a fundraising email this week highlighting “7 common careers Christians may no longer hold in America,” listing photographers, bakers, florists, journalists, counselors, innkeepers, and teachers as examples of professionals that the LGBT movement attempts to “ostracize and humiliate” for running their businesses “according to the dictates of their faith and conscience” — i.e., for blatantly discriminating against LGBT people. These tactics claim that those who engage in discrimination are the victims, not the actual victims of the discrimination.

Those supporting this “Freedom to Dissent” pledge are promising to tolerate intolerance, which is exactly what opponents of LGBT equality are demanding. It’s unclear how defending those who wish for LGBT people to remain second-class citizens constitutes “the only truly secure path to equal rights,” as the pledge claims.