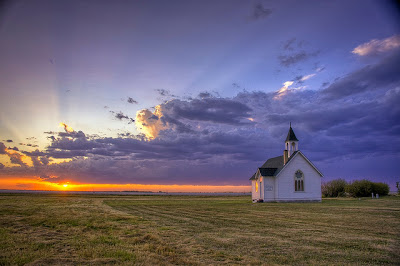 This blog often looks at the decline of Christianity in America and some of the underlying causes that in my view include (i) changing demographics, (ii) the constant message of hate and hypocrisy associated with the "Christian Right" in particular, (iii) the all too typical silence of the more progressive denominations in countering the extremes of Christianists, and (iv) the growing conflict between scientific knowledge and the Bible story line, especially the Old Testament.  Some denominations like the Southern Baptist Convention and the Roman Catholic Church try to pretend that the decline isn't happening and/or in some fantasy world belief system think that even more extremism and clinging to an inerrant Bible is the answer.  Others such as the Evangelical Lutheran Church in America of which I am now a nominal member admit the phenomenon of the shrinking church is occurring and seek to find ways to deal with the reality.   A piece in The Lutheran describes what is happening based on objective numbers, and summarizes the situation in part as follows:

Nearly 30 percent of ELCA churches reported an average worship attendance of fewer than 50 people in 2010. From 2003 to 2011, average weekly worship attendance dropped 26 percent. And from 2009 to 2010, ELCA membership decreased 5.9 percent, the sharpest rate of decline among mainline denominations, according to the National Council of Churches.

"Since the inception of the ELCA, we've seen decline every year, and it has accelerated over the last five years," said Elizabeth Eaton, bishop of the Northeastern Ohio Synod. "It doesn't matter where a congregation is situated, we have congregational decline in every demographic, every geography."

What we're seeing is not just a backlash against hymnals and potlucks. Nearly every U.S. Christian denomination has seen membership declines in the past two years, including Southern Baptists, who seemed invincible in the '70s, '80s and '90s.

And in 2012 the Pew Forum on Religion & Public Life reported for the first time that the number of Americans identifying as Protestant dipped below half, to 48 percent. Only Roman Catholics seem to be hanging on, which experts attribute to a growing Latino population.
When it comes to actively practicing religion, which includes worship attendance, the numbers are down across the board. "Of every measure or religious tradition or practice we track in surveys, none of them is going up," said Mark Chaves, professor of sociology, religion and divinity at Duke Divinity School in Durham, N.C.

"Part of the story is changes in family demographics. The main group that attends church is traditional families and older people. People are marrying later, having fewer kids or having no kids at all. That means the demographic subgroup that typically attends church is a smaller subgroup of the population," he said.  .  .  .  .  "Eighteen- to 35-year-olds aren't seeing church as really relevant to what they need to get done. They want meaning in their lives but don't necessarily see the church as providing that."

In a related piece, a list of questions is presented for parishes to use for self-examination.  Several jumped out in particular: Over the years, how did the community change and why? Who lives in the community now? Where do they work?  What do they do for fun? How does the church fit into their lives?  My home parish in Norfolk is wonderful in many ways and often displays the positive attributes that Christians should demonstrate.  But sadly it seemingly does not want to ask itself these questions.  The surrounding Ghent community still is home for many traditional families, but the larger neighborhood has become in many ways a liberal young hipster community and home to may in the LGBT community and arts community.   A 1970's style traditional parish that still clings to hymnals full of hymns from the 1800's or earlier simply no longer appeals to many even though the ECLA is one of the most moderate mainline denominations.  Symptomatic of this failure to change, the parish still has done no outreach to the LGBT community that surrounds it.  Why?  Out of fear of offending the sensibilities of olde,r conservative parishioners.  That's fine and good if the parish wants to die when the old folks die, but it is not a long term strategy for survival.  And from reading the letters to the editor in The Lutheran, my parish is all too typical of many ELCA parishes.

But at least the leadership of the ELCA recognizes the problem even if it doesn't know how to respond in a meaningful way.  In contrast, the Roman Catholic Church seems heel bent under the Nazi Pope to return to the 1950's.  And while younger Catholics flee, Catholic Church hierarchy is spending millions of dollars to deprive LGBT Americans marriage equality and fight contraception even as church buildings are literally falling into disrepair and facing demolition.  A case in point is  St. James Catholic Church, a 132-year-old Gothic structure in the South Side Bronzeville neighborhood of Chicago (pictured below), which may soon face the wrecking ball.  This from the Chicago Tribune:

The city pressed the Archdiocese of Chicago to do something about the church, which has been cited for building violations. Shortly after Christmas, the archdiocese got a permit to tear down the building, which preservationists want to save and congregants are reluctant to give up, even though the sanctuary is in such poor condition that Mass hasn't been celebrated there for more than two years.

The archdiocese asked for a demolition permit last fall, but it was automatically deferred because the 1880 building is on the city's list of historically significant structures. That deferral expired Dec. 23, clearing the way for demolition.


With what the Church hierarchy, NOM and the Knights of Columbus have spent attacking gay rights, churches like St. James and shuttered Catholic schools might be facing a different fates.  To me, given the totally perverted priorities of conservative denominations, it is little wonder Christianity is in decline in America.   The best argument for leaving Christianity is the "godly Christians" themselves. 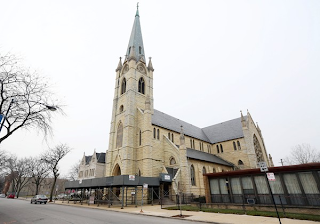 The reason christianity is shrinking away? Nobody is interested in something they don't need.
If you don't go to church because you believe, and belief declines, what else is there to make you go? "Activism"? You can do politics other ways. "Meet people"? There is Meet Up and other sites.
Church used to be the only game in town; now it's old hat and boring.

I think you are quite right. For many going to church is as much social as anything else and as society has changed there are far more social outlets for bonding and building friendships. Add to that the Church's increasingly untenable claims in the face of science and it all begins to fall apart.