The GOP Lies on Uncontrolled Government Spending Keep on Coming 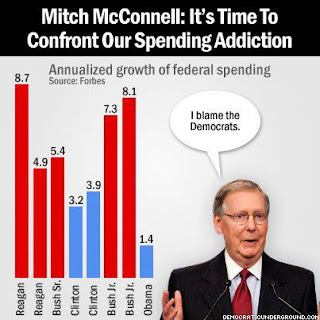 I have to wonder how any once rational Republicans have managed to stay in the GOP.  Have they (i) had a "Stepford Wife" make over done to them, (ii) simply drinking the Christofascist/Tea Party Kool-Aid by the gallon, or (iii) become pathological liars?  What is particularly amazing is how documented facts and objective reality itself just simply no longer seem to matter.  The chart above says it all in response to the ongoing Republican chant that out of control Democrat spending is what most threatens America's financial stability.  No mention, of course, is made to Chimperator George Bush's unfunded fool's errands in Iraq and Afghanistan or the budget busting Bush tax cuts.  Frankly, I would be embarrassed to tell anyone nowadays that I'm a Republican.
Posted by Michael-in-Norfolk at Monday, January 07, 2013