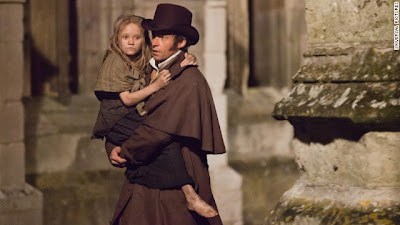 Friday evening the boyfriend and I went to see Les Miserables at the wonderful Commodore Theater (more on the theater in a future post) in neighboring Portsmouth which we found most enjoyable.  For non-students of history, Les Miserables was written by Victor Hugo in 1862, but the revolution story line was based on the actual June Revolution of 1832, which as in Hugo's story was brief and ended badly for the students as in the book and movie.  Hugo had some first had knowledge of the ill-fated revolution since as a student in 1832 he himself had been briefly been inadvertently caught between the opposing force close to Rue Mondetour.   Not all critics have been kind to the movie and indeed, not all of the singing is Broadway quality.  But there are pleasant surprises such as Cambridge educated Eddie Redmayer (previously seen in My Week with Marilyn) who has performed in London's west end and Aaron Tveit who has done Broadway stints.

One of the ironies I stumbled upon via CNN is that the movie has apparently been targeted for marketing to conservative and evangelical Christians on a theory that:

The story in "Les Miserables" is heavy with Christian themes of grace, mercy and redemption. The line everyone seems to remember is "to love another person is to see the face of God.”

NBC Universal looked to capitalize on those components and promoted the film to pastors, Christian radio hosts and influence-makers in the Christian community.

Colorado Springs-based Focus on the Family was one of the groups that partnered with Grace Hill Media for a special screening. For the event, Focus on the Family brought in partners from across Colorado, adoption agencies, child welfare officials and church leaders.

Yes, I saw these themes, but I also saw damning parallels with the social policies of today's Republican Party which seems determined to bring back the horrific wealth disparities seen in 1830's Paris and the disenfranchisement of and frightening health conditions experienced by countless Parisians, first under the Bourbon restoration and then under Louis Phillipe's rule (Louis Phillipe himself was eventually overthrown as the conditions of the working classes deteriorated, and the income gap widened considerably ).   Indeed, if one is not a white conservative Christian (preferably with a great deal of money), one is viewed by today's GOP much as the wealthy Parisians viewed the misfortunate and poor.

And then there is the figure of Javert, first appearing as a prison guard and later as a policeman who is inflexible and cruel, seeking a legalistic form of blind justice.  Javert is incapable of seeing the common humanity of others or the good and kindness in others. Thus the irony that the movie was marketed to the folks at Focus on the Family, an organization whose hallmarks are hypocritical legalism and misplaced self-congratulatory piety, along with huge doses of hatred towards those who don't embrace their fear and legalism based religious dogma.  If one is looking for someone judgmental like Javert, look no farther than James Dobson and the professional Christian crowd.

Will the Christofascists recognize themselves in Javert and today's Republicans see the similarities of their policies and during the rule of the Bourbons and then Louis Phillipe?  Sadly, I doubt it and all of us will suffer as a result.  History has many lessons to teach, but those filled with hubris and self-congratulatory piety rarely seem to learn the lessons.