Anti-Gay pastor Louie Giglio who had - in another display of Obama staff incompetence - been slated to give the inaugural benediction has withdrawn from the inaugural event line up ostensible to avoid becoming a distraction from the ceremony.  In the process, Giglio also attempted to down play the viciousness of his past anti-gay statements.    The situation is noteworthy for two reasons.  First, how incompetent are the Obama folks that they did not do a simple Google search on Giglio?  Second, Giglio claims that he's not anti-gay, but the man is a liar based on his past statements - statements that he has never disavowed.  Andrew Sullivan sums up the incompetence of the Obama staffers and Giglio's disingenuousness very well:

So the second Inaugural benediction for Obama turns out to be another clusterfuck. First, they had the fatuous Rick Warren, whose campaign against marriage equality was deemed irrelevant to the cause of uniting the country. Now we have Louie Giglio,  .  .  .  .  who, like most evangelicals, still believes that gay relationships, let alone marriages, are anathema.

[I]t is quite clear that Giglio has never 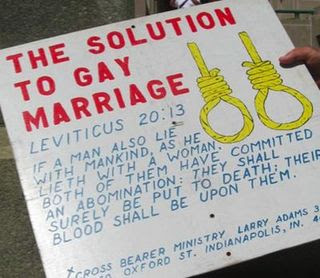 stopped believing that what he calls "the gay lifestyle" is a terrible crime against God. He also calls it one of the most important issues of the time. He proposes the horrifying abuse of "ex-gay therapy." He cites Leviticus, which mandates the death penalty for gays, and says it is the lynchpin of the teaching against homosexuality. In fact, he doesn't just cite Leviticus; he goes on for ever about it. He describes gay people as living a "lie," a term my born-again uncle accused me of doing when he found out I was gay. He calls us engaged in "depraved, lustful behavior" and being haters of God. He calls for his congregation to "firmly respond to the aggressive agenda" of gay equality.

His defense is that "clearly, speaking on this issue has not been in the range of my priorities in the past fifteen years." But in that sermon, he described it as possibly the most important moral battle of the time. And get a load of this: "Those who practice such things are worthy of death." And this:

[W]hat clueless administration official did not do due diligence on this figure? After the Rick Warren mess, could no one in the White House do the same research as Think Progress?

There's only way forward on this and that is to choose as his replacement a minister who endorses gay unions and full gay inclusion in the Christian community. Why would Obama object to that? He has "evolved" now, hasn't he?

Why is it every time that Obama builds good feelings within the LGBT community he seems to without thinking do something stupid and cause a great deal of bad feeling?