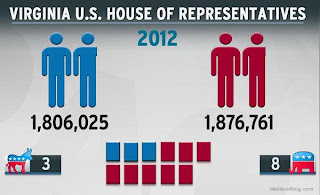 It should come as no surprise that the delusional GOP controlled House of Representatives believes it has a mandate to slash and burn governmental services and social programs because far too many members of the GOP caucus not to mention their Christianist/Tea Party base live in a veritable alternate universe from objective reality.  But the real reason that the GOP still holds a majority in the House comes down to a single word that has nothing whatsoever to do with public approval of GOP policies: gerrymandering.  There is ZERO mandate for the GOP's failed policies and but for gerrymandered districts in the worse sense of the word, Democrats would hold the House.  Sadly, given how redistricting works, the nation will be faced with a dysfunctional GOP majority for some time to come in all likelihood.  A column in the Washington Post looks at this egregious situation.  Here are highlights:

As a new Congress convenes, it has become an unquestioned truth among Republicans that their party has as much of a mandate as President Obama because voters returned them to power in the House.

The mantra has been intoned by John Boehner, Paul Ryan, Mitch McConnell, Newt Gingrich, Grover Norquist and many other party eminences, and there is a certain logic to saying that the voters, by giving Republicans the House, were asking for divided government.

But the claim to represent the voters’ will doesn’t add up.

The final results from the November election were completed Friday, and they show that Democratic candidates for the House outpolled Republicans nationwide by nearly 1.4 million votes and more than a full percentage point — a greater margin than the preliminary figures showed in November. And that’s just the beginning of it: A new analysis finds that even if Democratic congressional candidates won the popular vote by seven percentage points nationwide, they still would not have gained control of the House.

[T]he Republican House majority is impervious to the will of the electorate. Thanks in part to deft redistricting based on the 2010 Census, House Republicans may be protected from the vicissitudes of the voters for the next decade. For Obama and the Democrats, this is an ominous development: The House Republican majority is durable, and it isn’t necessarily sensitive to political pressure and public opinion.

This in itself is an extraordinary result: Only three or four other times in the past century has a party lost the popular vote but won control of the House. But computer-aided gerrymandering is helping to make such undemocratic results the norm — to the decided advantage of Republicans, who controlled state governments in 21 states after the 2010 Census, almost double the 11 for Democrats.

[T]he 2012 House results show the redrawing of districts to optimize Republican representation clearly had an impact. Consider three states won by Obama in 2012 where Republicans dominated the redistricting: In Pennsylvania, Democrats won just five of 18 House seats; in Virginia, Democrats won three of 11; and in Ohio, Democrats won four of 16.

Republicans don’t have a permanent House majority, but they will go into the next several elections with an automatic head start. For many, the biggest political threat comes not from Democrats but from conservative primary challengers.

Locally, it is because of horrifically gerrymandered districts that far right, religious extremists, hate group endorsed candidates like Scott Rigell were re-elected.  Had Rigell's district not been twisted a redrawn like a pretzel, carefully consolidating the most conservative districts across four cities, he likely would have been defeated.