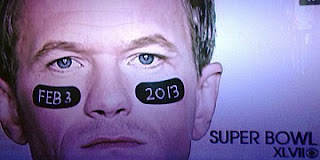 One has to wonder about those who seemingly are constantly looking for offense and slights in virtually anything and everything.  But when it comes to Christofascists, they take this phenomenon to unbelievable heights.  Perhaps it is because they are not in touch with objective reality to begin with.  That certainly applies to the folks at World Net Daily, a/k/a Wing Nut Daily, who now have their patties in an utter wad over new ads being run by CBS for this year's Super Bowl game.  The source of the shrieks and outrage?  The ads feature Neil Patrick Harris which, in the minds of the unhinged translates to mockery of Christians.   I increasingly believe these "godly Christian" types belong in mental wards rather than loose in society.  Queerty looks at this latest batshitery.  Here are highlights:

“CBS, the television network airing the big game this year, is now using an outspoken homosexual actor to mimic Tim Tebow’s style of trumpeting messages in eyeblack on his face,” said the site. “One football fan who watched the CBS promo Sunday made the connection between Harris and Tebow, saying, ‘They’re pushing a gay agenda by using him, and they’re mocking Christians at the same time.’”

WND even included an unnecessarily long poll asking if CBS is mocking Tebow and/or Christianity with the majority of voters (all 352 of them) choosing “Yes, and every effort should be made to boycott CBS and its advertisers.”

Of course, for some football fans Tebow represented the second coming. For New York Jets fans, however, NPH would probably make a more desirable quarterback.