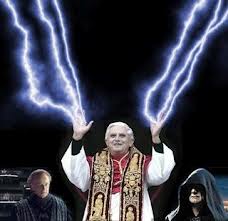 As this blog regularly points out, the Roman Catholic Church remains embroiled in a world wide sex abuse scandal which more and more with every passing day points to a criminal conspiracy involving the hierarchy from the current Pope (and his predecessors) on down, Catholic schools are closing across America due to lack of funding and often declining enrollments, parishes are being shuttered due to lack of funds and/or a lack of priests, and historic church buildings are facing the wrecking ball because of inadequate funding to maintain them.  Yet what is the Church hierarchy's biggest focus?  Depriving same sex couples of CIVIL marriage rights.  My blogger friend Bob Felton - who is becoming more and more of a straight ally and who I've come to know through this blog and his blog, Civil Commotion - has an excellent post that underscores the lengths to which and the lies the Church will disseminate in order to harm LGBT individuals and deprive them of CIVIL legal rights.   Here are highlights from Bob's Post:

The Diocese of Rhode Island released yesterday a public letter to that state’s legislature, which is considering legislation that authorizes same-sex marriage. It was written by Bishop Thomas Tobin, and is celebrated by the Catholics League’s Bill Donohue as “the most comprehensive defense of marriage made by any bishop in the nation. Indeed, he leaves no matter attendant to this subject untouched.”

The letter is ridiculous; it seems hardly possible that the man might seriously believe he is fooling anybody — besides Bill Donohue, I mean. Consider just the first paragraph:


The proposal to legalize same-sex marriage is an attempt to redefine the institution of marriage as it has existed in every culture from the very beginning of human history. Marriage between a man and a woman was designed by God for two specific purposes: to affirm the complementary roles of males and females in a loving relationship, and to provide a stable foundation for the procreation and raising of children. Homosexual relationships can achieve neither of those goals.

An “attempt to redefine the institution of marriage as it has existed in every culture from the very beginning of human history?” Not even close. He is doubtless aware that Muslims throughout the world, and Fundamentalist Latter Day Saints, practice polygamy today. He doubtless knows that Solomon, a man celebrated for his wisdom, is reported by the Inerrant Bible to have had 700-wives, and an additional 300-concubines. He doubtless knows that the Old Testament boys were forever “going in unto” the maids, the slaves, the neighbor ladies, and that at least the Holy Men thought it was a pretty good system.

He doubtless knows that monogamy didn’t become the norm even in Christianity until Paul, recognizing that his pitch for celibacy wasn’t going over too well, conceded that it would be all right for those not given that curious gift to have one wife. One wife — a policy adopted about 20-years after the crucifixion of Jesus.

Does the Bishop actually expect to be taken seriously?

Yes, he does — but not by the legislature. He expects to be taken seriously by the laity, who will then write evil-tempered letters to the legislature. He know he is lying about the facts of marriage, he knows the Creation tale is laughable nonsense — and he knows the poor simpletons of his flock know very little and think even less. This letter is an exemplar for the truth about the relationship clergy have with their congregants: predatory contempt.

Yes, Bob is harsh in his assessment, but sadly it is the truth.  What is frightening is that more of the laity cannot see that they are being played for simpletons and suckers.  And the bishop himselt?  He's little better than one of Emperor Palpatine's storm troopers from the Star Wars saga.

Posted by Michael-in-Norfolk at Tuesday, January 08, 2013