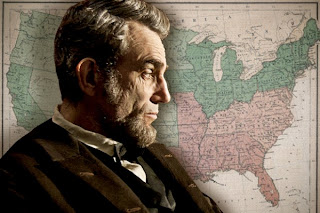 With the notable exceptions of Florida and Virginia, the states carried by Mitt Romney included the entirety of the old Confederacy and the region of the Old South has become the bastion of the Republican Party.  It is also the bastion of gay haters and those who continue to seek to subjugate the rights of women.   The Old South was most happy to maintain a society that held some in second class status or worse and things haven't really changed that much other than women and gays have been more or less added to the groups targeted for second class citizenship.  Here in Virginia, bills that would protect LGBT citizens from being fired by state departments and agencies and a bill requiring that women receive equal pay for the same work will face uphill battles.  A piece in Salon conjectures that we are indeed in a new civil war where the toxicity again arises from the states of the former Confederacy.  Here are some excerpts:


[E]ven though it’s a truism of American public discourse that the Civil War never ended, it’s also literally true. We’re still reaping the whirlwind from that long-ago conflict, and now we face a new Civil War, one focused on divisive political issues of the 21st century – most notably the rights and liberties of women and LGBT people – but rooted in toxic rhetoric and ideas inherited from the 19th century.

We’ve just emerged from a presidential campaign that exposed how hardened our political and cultural divide has become, and how poorly the two sides understand each other. Part of the Republican problem, in an election that party thought it would win easily, was that those who felt a visceral disgust toward both the idea and the reality of President Barack Obama simply could not believe that they didn’t represent a majority. As many Republicans are now aware, the party now faces an existential crisis. It’s all very well to go on TV and talk about attracting Latinos and downplaying cultural wedge issues. But the activist core of the Republican Party is neo-Confederate, whether it thinks of itself that way or not. It isn’t interested in common cause with Mexicans or turning down the moral thermostat. Just ask Rick Santorum: What it wants is war.

In the recent “fiscal cliff” negotiations, which ended (of course) in yet another short-term stopgap measure, most congressional Republicans, having sworn a blood oath never to raise taxes on their millionaire patrons, were content to let the nation slide into chaos and catastrophe rather than reach a compromise with the president they have consistently depicted as a socialist renegade or alien interloper.

The lingering effects of our racist history – from the resegregation of our public schools to the enduring and astonishing “wealth gap” between whites and blacks – are national problems, not just Southern problems. Our new Civil War is infused with the undead spirit of the old one and waged by a rebellious neo-Confederacy rooted in the states of the Old South, but its influence can be felt, as with the pro-slavery forces of the 1860s, in every part of the country.

While the issues of the new Civil War are contemporary, its rhetoric is ancient and all too familiar, from states’ rights and resistance to Washington to claims of a special relationship with the Almighty and vague appeals to distinctive “cultural traditions,” employed as a justification for bigotry and oppression.

Many people on the neo-Confederate side see abortion and Adam-and-Steve marriage as moral outrages or offenses against God, to borrow Lincoln’s phrasing, which must be stopped at almost any cost. Of course, pro-choice activists and marriage-equality advocates see those issues as matters of basic economic justice, guaranteeing to all people the kind of basic personal autonomy that men take for granted, or the common-law legal and medical rights that heterosexual married couples have long enjoyed.

We appear to be moving into an unstable Missouri Compromise period of American history, in which regional tiers of states adopt sharply different policies on reproductive rights and marriage rights in particular, but also seem locked into fixed political identities and differing views on fundamental questions of national identity and the national future.

If you correlate the states where both same-sex marriage and same-sex civil unions have been banned and the states with the harshest restrictions on abortion, you begin to measure the breadth of the neo-Confederacy: Alabama, Arkansas, Georgia, Idaho, Kansas, Kentucky, Louisiana, Mississippi, Nebraska, the Dakotas, the Carolinas, Oklahoma, Texas, Utah. Most (but not all) are onetime Southern slave states and hotbeds of evangelical Christianity, and most (but not all) coincide with the familiar red-blue split between Republicans and Democrats.

Do I even need to mention that none of the neo-Confederate states are in the Northeast or on the West Coast, regions where abortion remains widely available and same-sex marriage is rapidly becoming routine? Or that the neo-Confederate states of the South and the Plains States have sent nearly all of the intransigent, anti-taxation Tea Party members to Congress, while the neo-Union states of the East and West, with their polyglot, immigrant-rich populations, have elected few or none?

As with slavery, however, it’s tough to imagine any viable long-term middle ground. At the moment, two women who get married in Iowa will have no legal relationship if they move to Kansas, and a teenage girl in Seattle can easily get a safe and legal abortion while her cousin in Dallas faces mandatory counseling, a 24-hour waiting period and a parental consent law. (If they have another cousin in rural Mississippi, she probably won’t find legal abortion services under any terms.) Regardless of how you feel about those issues, that’s nuts. No nation-state can function indefinitely on that kind of patchwork-quilt basis.

It’s tempting to call upon history and proclaim that the only possible outcome of this new Civil War, after many years of ugly politics and occasional outbreaks of craziness and violence, will resemble the outcome of the last one: the continued expansion of constitutional rights and freedoms and the final defeat of the Confederate strain in American political and cultural life. But other, darker outcomes are definitely possible, and I suspect that as long as we’ve got a country, the Confederacy will still be with us.


It is nuts that as a gay man in Virginia I have NONE of the legal rights now taken for granted in states like New York - or even in Maryland just across the Potomac River.  And it makes a mockery of America's claimed founding principles of equality and the rights of citizens to pursue life, liberty and happiness.